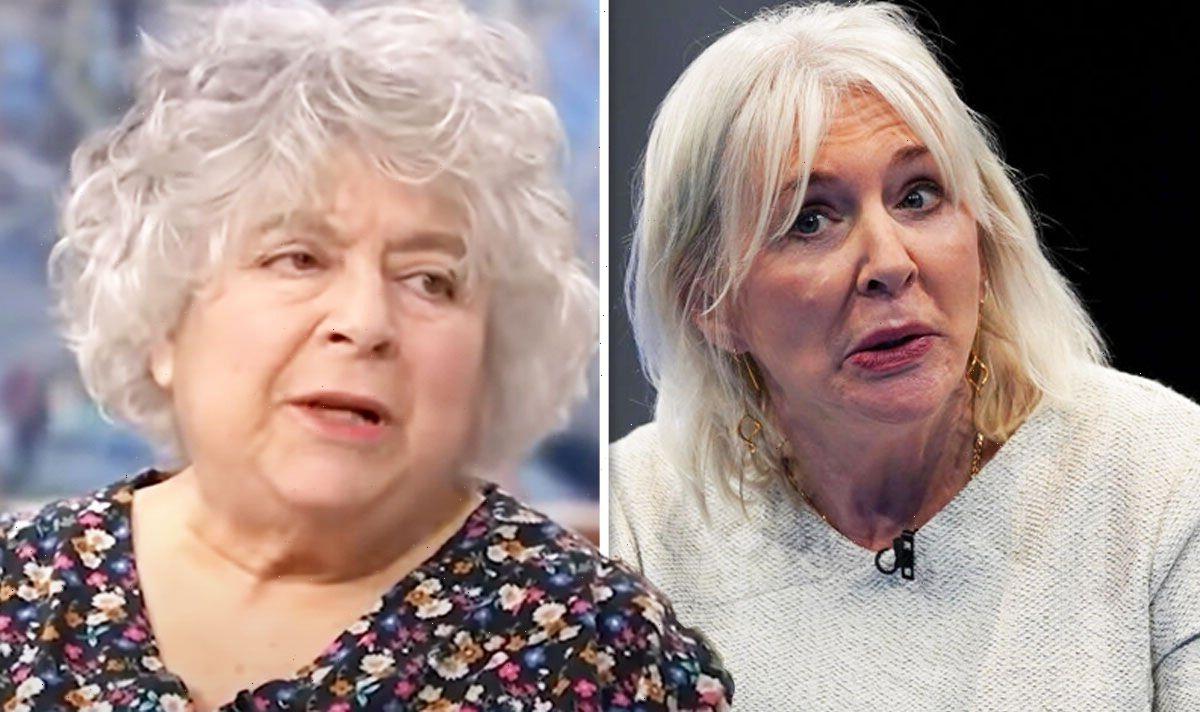 Culture Secretary Nadine Dorries has been called out by Miriam Margolyes as the Harry Potter actress branded the Conservative Cabinet minister of having very “limited intelligence”. Her furore comes after the Tory MP has proposed plans to privatise Channel 4 and in addition freeze the BBC licence fee.

The Government has been consulting on plans to privatise C4, with sources insisting that ministers believe that public ownership of the broadcaster is “holding it back” from competing with streaming giants such as Netflix, Amazon Prime Video and Disney+.

But Labour and C4 stars have accused Boris Johnson’s government of deciding to sell the broadcaster for £1billion because of a “petty vendetta” against its Left-wing news bulletins and personal attacks on the Prime Minister.

Some critics have claimed that Nadine’s pledge to take it out of public ownership is “payback” for “biased coverage”, including Brexit and climate change.

In addition, the culture secretary announced plans for the BBC, with the broadcaster’s funding to be frozen for the next two years, and the licence fee being abolished completely in 2027.

Miriam, 80, has since spoken out about Nadine’s move and has called her role in government into question.

Speaking in a new interview, the Happy Feet actress is admittedly outraged by the culture secretary’s treatment of the BBC and Channel 4.

Miriam told Radio Times: “It’s inconceivable to me that a woman of limited intelligence can be given such a vital role.

“She doesn’t know anything about anything.”

Launched in 1982, Channel 4 is a government-owned TV broadcasting company, which now consists of 12 channels including Film4, E4, and its own streaming service, All 4.

However, instead of receiving public funding (like the BBC), Channel 4 gets its money through advertising.

Unlike other broadcasters, it doesn’t make its own shows – they are all made by independent production companies and any profits go back into programme-making.

The privatisation is expected to be included in the forthcoming Media Bill, a new law that must be debated and passed in Parliament.

However, the move has already been met with criticism from Labour and some Conservative MPs, including the former culture secretary Jeremy Hunt, who told Sky News: “As it stands, Channel Four provides competition to the BBC on what’s called public service broadcasting – the kinds of programmes that are not commercially viable – and I think it’d be a shame to lose that.”

The culture secretary has since defended her move and claimed the criticism has been “inflammatory”.

Writing in The Mail on Sunday, Nadine said: “Last week I made the decision that it is time to unleash the broadcaster’s full potential and open Channel 4 up to private ownership and investment while protecting its crucial public service broadcasting remit.

“Sadly, the reaction was as predictable as it was inflammatory.

She added: “They’re happier sneering, accusing me of not being ‘smart enough’ to understand Channel 4 or descending into full-on abusive hysteria.

“One Labour MP claimed a Channel 4 sale would be ‘the seedbed of Fascism.’

“I shouldn’t be surprised. This streak has always existed in and around Channel 4.”

You can read the full interview in this week’s Radio Times out now.