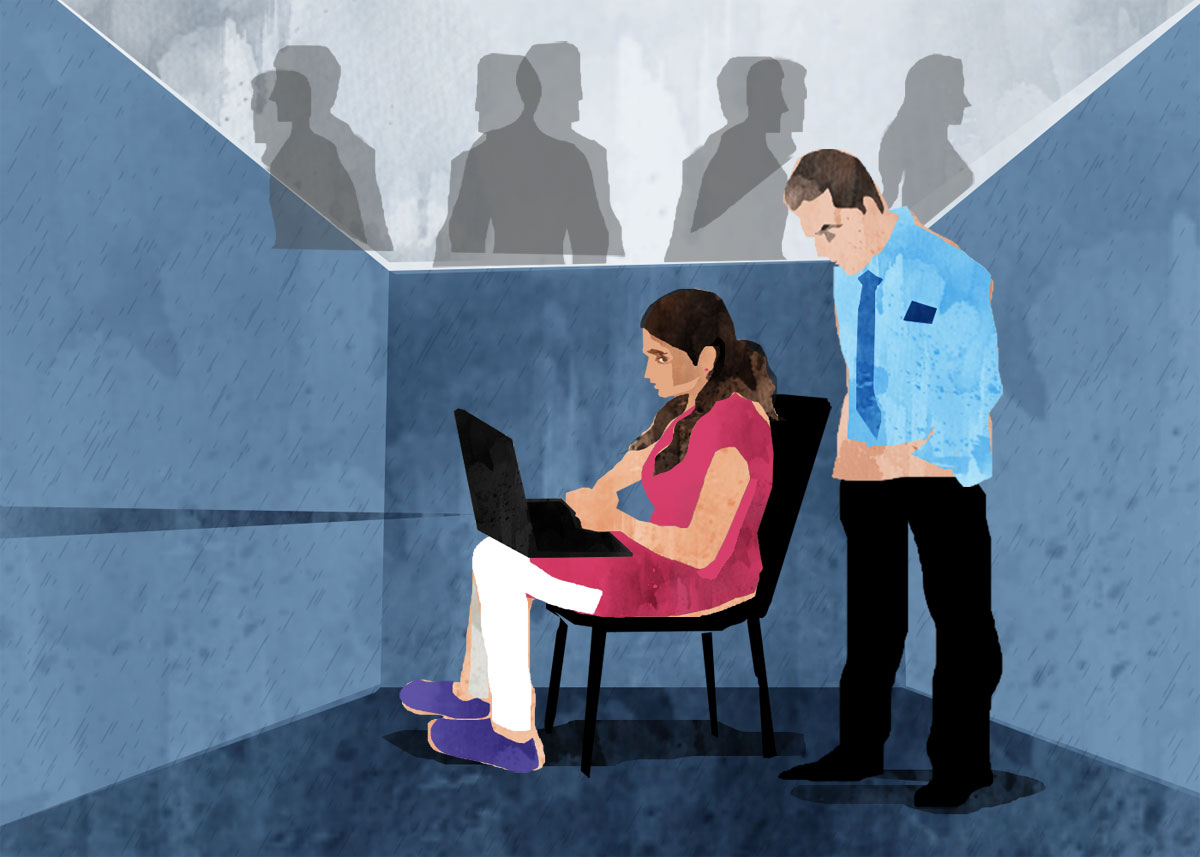 When I was very new at my job I recall a colleague who felt it was ok to get too close for comfort or even try to hold my hand if he got a chance.
I was too afraid to speak up because he had tenure in the organisation and was a favourite with my boss, remembers Aarti David.

I watched two movies recently dealing with the issue of workplace sexual harassment.

The first movie Bombshell is based on the Fox News scandal involving a lawsuit against the network’s CEO and chairman Roger Ailes and the second one She Said is based on a 2019 book titled She Said: Breaking the Sexual Harassment Story That Helped Ignite a Movement which highlights the New York Times investigation that exposed Harvey Weinstein’s history of abuse and sexual misconduct against women.

They resonated so much with me as I was reminded of instances from my own work life while watching them.

What the movies highlighted is not something that was suddenly discovered. It was just that someone found the courage to speak up and in one case the investigations became the trigger for the #metoo movement.

This helped a lot of women gather courage to speak up against harassment or misconduct at the workplace, not just in the US but all across the world.

We all perceive a workplace to be a safe haven away from home. As we end up spending a major chunk of our day over there.

Our colleagues become a part of our life too. However, not everyone is lucky to have the best colleagues/peers/bosses and may go through some traumatic experiences which they are unable to share with anyone.

There are very subtle ways in which you may find advances being made or things being said to you. That you may dismiss as nothing as you’re new to the job and finding it hard to fit in to the new environment.

You may not be able to report the incident because of the seniority of the individual. And/or the fact that you’re too new.

Or simply because many a time, you end up blaming yourself for the incident.

I guess it is a result of our social conditioning that we end up blaming ourselves instead of the wrongdoer.

We are always told how we should look/dress/appear behave in public.

We aren’t told how to act/react in real time situations when such incidents do occur and what should we do to report the same.

Oddly, these incidents take place regardless of how one dresses or how one conducts themselves, it also doesn’t have anything to do with the fact that you may not have led them on in any way.

Such incidents could happen at offsites, at meetings, in large gatherings, or even in one to one meetings behind closed doors.

The stigma attached with calling out someone is not easy to handle for anyone. It’s not as if companies don’t have policies in place or don’t follow the mandatory PoSH guidelines.

It’s just that when one joins an organisation one is told about these during the induction and some refreshers for the employees from time to time. But very few actually concern themselves with employee well-being during the course of their work life.

No one pauses to check if a colleague is stressed due to anything beside work. There is just so much to occupy one’s time and mind space.

Often times the perpetrator gets encouraged by the silence of the victim and continues with the offensive behaviour repeatedly.

When I was very new at my job I recall a colleague who felt it was ok to get too close for comfort and whisper inappropriate comments into my ear or even try to hold my hand if he got a chance.

I was too afraid to speak up because he had tenure in the organisation and was a favourite with my boss.

The only recourse I had was to avoid the individual whenever we were in the same space due to our work.

He would call me often and want to speak about unnecessary stuff and I wasn’t able to hang up on him as he used to make statements implying how close he was to my boss.

I would speak for a few minutes and then politely end the call. I was so afraid he would defame me.

Being too new in the job didn’t help matters. Frankly there was no one in HR who could handle such issues. There was no HR to speak of.

I felt exploited, I felt cheap, and I even wondered if I had led the person on in any way.

I didn’t feel comfortable in being able to share this with anyone at the workplace for fear of being blamed for the same. And spent the initial years at work feeling quite troubled and distraught, yet putting up a brave front for the world.

Why is that, one would wonder. Well, it is primarily because of our social construct.

If we were to just pause and reflect at the recent murder of a young girl at the hands of her partner and the kind of comments and outrage that has erupted as a result, you would understand what I mean.

Instead of incriminating the murderer, people are busy assassinating the character of the victim and talking about morality and our culture being corrupted as a result of the live in status which is utter nonsense.

The main issue has been completely side-tracked. This is the same way so many women spoke up against harassment they faced at their workplace with the rise of the #metoo movement and how much backlash they faced.

A few managed to get the offenders exposed as well, but many had to face dire consequences because the people they called out were in positions of power and used their muscle to thwart their voices.

The big difference this time around was the power of social media and many others rallying in support of the survivor. This gave a lot of others hope and courage to come forward.

Your place of work is where you end up spending a major chunk of your time and life, away from home and it needs to be an equally safe space for people across genders to feel comfortable.

Yet, a lot of times we find people to be tentative or too scared of opening up, especially when you are new at a workplace or you’re just afraid because of your gender or the fact that you are single or divorced and don’t want to be labeled into any category as a result of that (all because of societal constraints or stereoptypes).

It is so important that we have open conversations about this topic and also a zero tolerance toward harassment/bullying of any kind, so that people (regardless of gender) are able to come out and speak up without fear of retribution.

While the #metoo movement created a lot of awareness and conversation around sexual harassment and abuse at the workplace and brought about change, we still have a long way to go in terms of creating a gender equal world and workplace where women truly feel empowered and safe enough to speak up and speak out freely and remember that they are not defined by what they experienced.

This is best explained by this quote by Maya Angelou (Letter to My Daughter): ‘I can be changed by what happens to me. But I refuse to be reduced by it.’