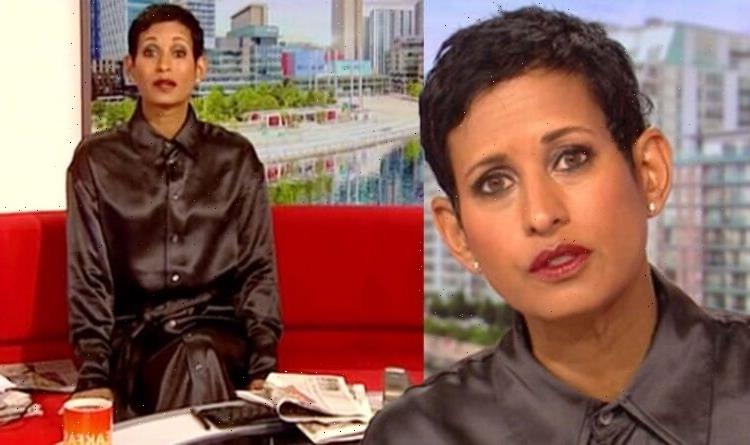 Naga Munchetty, 47, has developed a lengthy career with the BBC, working at the moment on Radio 5 Live and BBC Breakfast. Despite her success, the presenter was forced to defend herself this morning, as she fired back at a viewer who asked if she “forgot to get dressed” this morning.

Naga looked great as she appeared on BBC Breakfast this morning in an elegant satin number.

She wore a black silky buttoned up shirt dress, complementing the chic outfit with a pair of stud earrings.

Naga also went for a smokey eye make-up look and a sultry dark lipstick, to match her dress.

However, one viewer, Twitter user SHuggett, wasn’t impressed with the look, writing to the presenter on social media: “@TVNaga01 Sweetheart, did you forget to get dressed this morning? X.”

The mother-of-one said at a press conference following her release: “I have seen five foreign secretaries change over the course of six years, that is unprecedented.

“I was told many times, ‘We’re going to get you home’, and that never really happened.

“How many foreign secretaries does it take to get someone home? Five. What happened now should have happened six years ago.”

Following the press conference, “ungrateful c**” trended on Twitter as cruel users thought Nazanin, whose daughter was one when she was detained, should have shown more gratitude.

The presenter posted a screenshot of her trending page, which had “#ungratefulcow” at the top, to her Twitter followers.

More than a hundred users swiftly took to the comments, echoing Naga’s astonishment.

Stevefry said: “I hate the country we’ve become. Racism and misogyny are now endemic in certain parts of our society. It’s vile.”

Fayhurst83 added: “So depressing, stupidly took a peak at the tweets with this hashtag and quickly wish I hadn’t.”

Kevdixon4 commented: “Most people on here moan about a train being six minutes late.

“So I imagine they should be quiet about this young lady being upset about being locked up for six years.”