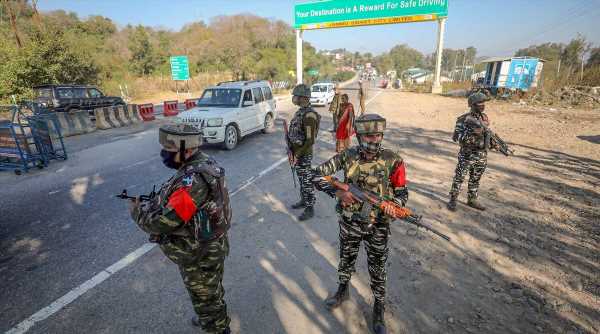 The Punjab DGP had asked border district SSPs to 'give special attention to drones and suspicious people moving in the vulnerable areas. Punjab Deputy Chief Minister, Sukhjinder Singh Randhawa, on Monday directed the police force of the state to increase night patrolling in areas under their jurisdiction in order to “ensure that law and order is maintained.”

Randhawa’s prod to the police to increase security comes after a hand grenade blast near the gate of the Army cantonment in Pathankot. Luckily, no one was injured in the incident.

In a written statement emailed to media, Randhawa said, “It has come to my notice that adequate police patrolling was not carried out during night.”

He directed all the Commissioners and SSPs to prepare a duty roster of gazetted officers in their respective commissionerates/districts.

Randhawa said that “at least one-third of the officers should be on patrolling duty during night.”

“I will be randomly checking the location of duty officers at any time by making a video call to them. Security of the state will not be compromised at any cost and strict action will be taken against all negligent officers,” Randhawa said.

Principal Secretary, Home, Anurag Verma, meanwhile, has issued letters to the DGP, ADGP (law & order), Commissioners and SSPs in this regard asking them to follow the directions of the Deputy Chief Minister.

On September 30, citing “current security scenario”, the officiating Director General of Police (DGP) Punjab, Iqbal Preet Singh Sahota, had directed all the senior superintendent of police to start night domination operations along the India-Pakistan international border from 9 pm to 4 am. The border districts of Punjab include Pathankot, Gurdaspur, Batala, Amritsar Rural, Tarn Taran, Ferozepur and Fazilka.

The DGP had asked border district SSPs to “give special attention to drones and suspicious people moving in the vulnerable areas”.

He had also ordered SSPs to utilise all Police Control Room and Rapid Rural Police Response vehicles and bullet proof material to cover vulnerable places, besides activating all the control rooms.

The DGP had also directed SSPs to divide their districts into sectors and depute gazetted officer for every sector, who will be personally out on the night domination operation.

Sahota had said, “All nakas in the second line of defence, and other sensitive locations ought to be manned at night under the supervision of a non-gazetted officer, while additional nakas should be put-up on ancillary roads for checking of vehicles.”

The DGP had also directed that “inter-state nakas, especially on the Jammu and Kashmir border, be strengthened and all vehicles coming from J&K be thoroughly checked.”