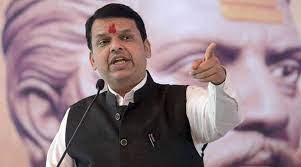 "It is evident that the government is turning blind eye to violence which took place during the rally organised by Muslim groups lead by Raza Academy," said the opposition leader who visited Amravati on Sunday. “If the government has courage they should ban Raza Academy,” he said. They should stop mindlessly targeting BJP workers and framing them in false cases. Four police stations are registering cases on BJP workers for one incident. Those who did not participate in any rallies are also being hounded. If this continues BJP will be left with no other alternative but a ‘jail bharo’ agitation,” he said.

“The developments in Amravati city leading to violence and communal clashes were extremely unfortunate. A thorough investigation should be carried out to ascertain who permitted the rallies in the city.”

“It is evident that the government is turning blind eye to violence which took place during the rally organised by Muslim groups lead by Raza Academy. This was the first rally marred by incidents of violence against police and citizens and shops. It cannot be overlooked,” he said.

The protest in Amravati led to stone-pelting, prompting BJP to call a bandh in the city the next day. During this bandh, vehicles were burnt and some shops owned by Muslims were allegedly torched.

“What happened the next day was a reaction from citizens who took out a protest march. The state government is blatantly misusing the police force to target only BJP leaders and workers who expressed solidarity with citizens,” Fadnavis said.

Apart from Amravati, Nanded in Marathwada and Malegaon in rural Nashik district were the other places in Maharashtra that witnessed violence last week.

“The Muslim organization’s rallies in Maharashtra was based on Tripura (attack) where no such incident of attack on Muslim or mosque had taken place. These rallies were part of a well-orchestrated plot. It had the state government’s patronage,” he said.

The former CM also said that Congress leader Rahul Gandhi’s tweet on the incident was misplaced. “It was based on wrong information. Since Congress and political rivals cannot fight the Narendra Modi government on the development agenda, it is whipping up a communal agenda to create unrest and anarchy in the country,” he said.