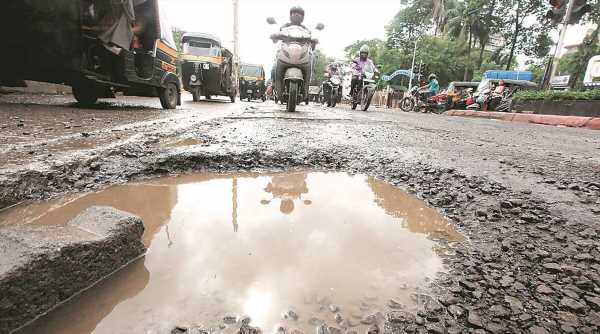 The Bombay High Court on Monday asked the state government to consider a state-wide policy with ‘concrete measures’ to deal with the ‘recurring issue’ of potholes on public roads and highways to avoid accidents and traffic jams suffered by ‘common citizens’.

The court also warned the state government, contractors and other authorities to prioritise the widening work of the Mumbai-Goa National Highway (NH-66), which started 10 years ago and fill up the potholes without which it will not allow the government to take up any other project like the ‘coastal road’ passing through three districts in the Konkan region.

A division bench of Chief Justice Dipankar Datta and Justice Girish S Kulkarni was hearing public interest litigation (PIL) filed by Owais Anwar Pechkar, a resident of Chiplun city in Konkan and a regular commuter using the highway. The PIL has sought directions from the state government and the NHAI to resolve various issues faced by commuters, including steps to fix and cover potholes on National Highway-66 prone to accidents.

Advocate General Ashutosh Kumbhakoni said that potholes on the highway have surfaced because of the monsoon and are being filled up earnestly. The widening work will speed up as the monsoon starts receding in the region to attain the deadline of project completion, he added.

The bench said, “Why does the state government not think of concrete policy about potholes? This is a recurring issue leading to accidents and traffic jams etc. Every year potholes are coming up at the same places. Why not have some concrete measures so that all these problems will stop once and for all?”

It added, “Your (state) officers had once given good solutions about cold mix and material, including plastic bottles etc. Why is this kind of technology not used? That will be helpful for all roads in municipal corporation areas, highways. These are issues touching common citizens and we want these issues to be focussed upon by the government. This court had passed orders on potholes in 1996 and there has been no improvement since then. It appears there is no will (on the part of the government).

The court further said, “Unless you complete this project, we will hold that you should not take up any other project. Let the public reap the benefits of this project.”

The high court also suggested that authorities can also consider diverting ‘city’ vehicles heading directly to Goa, barring local vehicles through alternate roads so that the contractors can complete the work in ‘peace’ in an expeditious manner and ‘citizens do not suffer’ due to the same.

The court also asked Kumbhakoni to inform it about the current status of the potholes on the Mumbai-Goa Highway and direct the officers to take action and fill up the same at the earliest. The high court then adjourned a further hearing in the matter after three weeks.