There were 150 women parking attendants who were working at the city’s parking lots, with most of them being breadwinners of their families. The women attendants were being paid Rs 8,000 per month and were waiting for July 20 to get their salaries.

There were 150 women parking attendants who were working at the city’s parking lots, with most of them being breadwinners of their families. The shift of the women attendants was from 8 am to 5 pm. The women attendants were being paid Rs 8,000 per month and were waiting for July 20 to get their salaries.

On Monday afternoon, they were shocked when they got to know that they had lost their jobs. Meena, a woman parking attendant who works at the Sector 35 parking lot, was taking her lunch when around 2.30 pm, the officials of the Municipal Corporation came. “I was having lunch when the officials came and asked me to close the booth immediately. They asked me to vacate it with immediate effect. Where will I go now? I am the breadwinner as my husband has health issues,” she said, adding that she was awaiting the last month’s salary too. 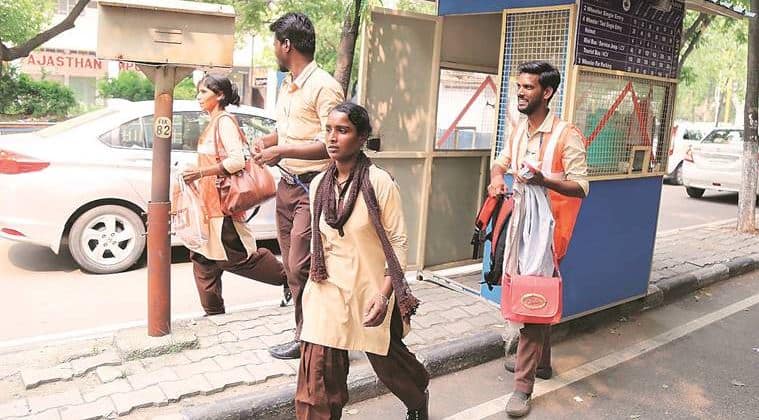 The attendants were not paid for the last month as well as they were told that there were some issues and this month’s salary along with the pending dues would be paid in this month. Cheena, another woman parking attendant who works at the Sector 9-D parking lot, said that she was the only one supporting her family with this job. “All of a sudden, where will I look for another job? I don’t even know what I will tell my family that my job is no more. My husband drinks a lot, he doesn’t work. I have two small daughters,” she said. “How will I pay the school fee of next quarter?”

Jyoti, who worked at the Sector 34 parking lot, said that she wanted to financially support her father who was a painter and that is why she took up this job. “Being a parking attendant is tough as you have to deal with different kinds of people, including a bad element, but I didn’t give up because my sole aim was to support my father financially who couldn’t earn much. At least the civic body should have given some notice period so that we could look for another job,” she said, adding that it was easy for a male attendant to find a job but not for women. There are 350 male attendants as well.

All the parking attendants had one question on their mind: Do they need to come to work tomorrow. They had gathered at the Sector 17 makeshift office of the firm at multilevel parking to know about it, but soon the MC officials came and took possession of the multilevel parking lot as well.