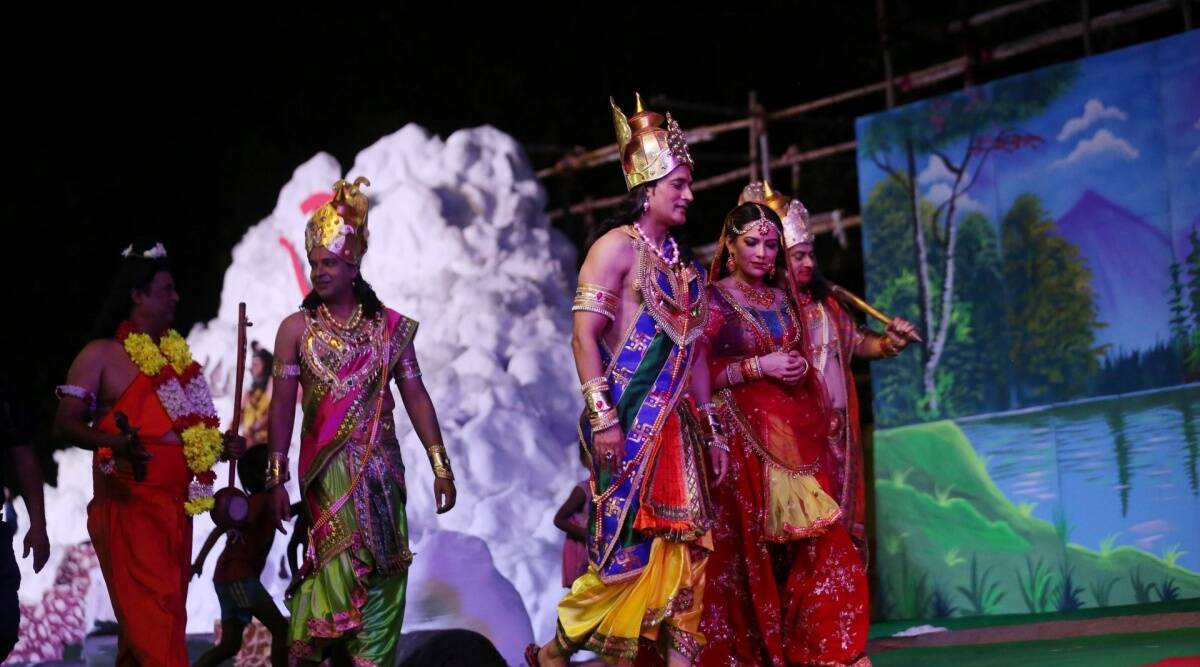 It was only after the recent Delhi Disaster Management Authority (DDMA) guidelines relaxed prohibition on social gatherings for the festive season that the producers, directors, and artistes knew that they would be performing in the Lal Qila like they used to before. 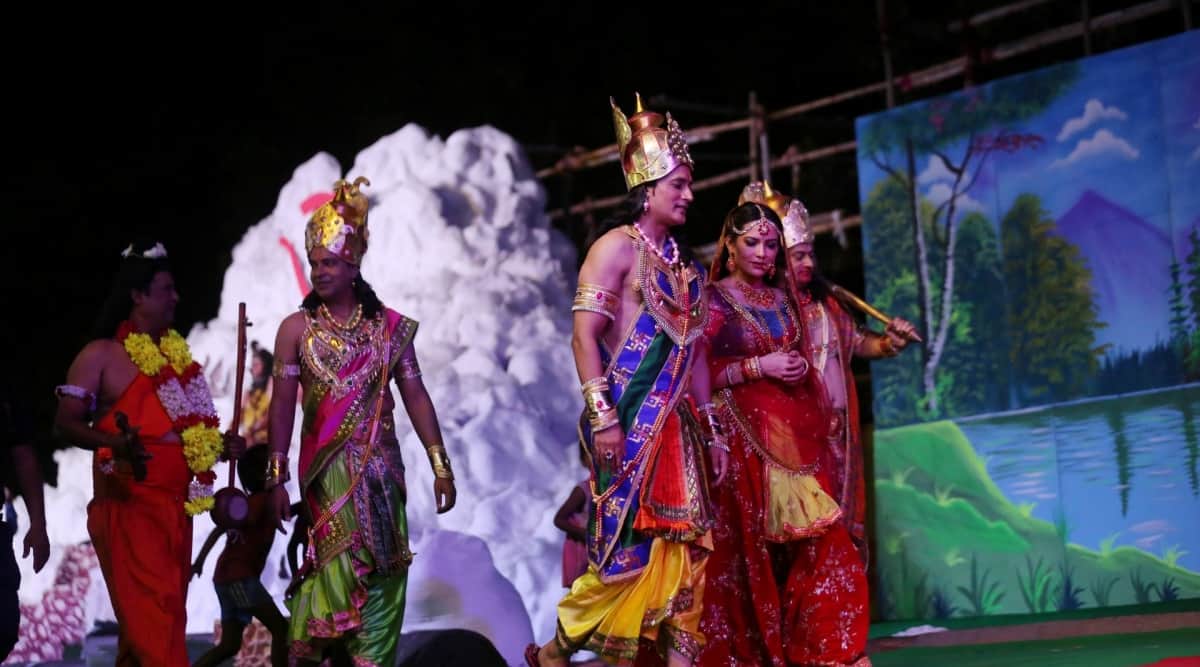 Fewer days of practice, socially distanced seats for the audience, and a new set of protocol for both audience and artists: A Ramlila of a different kind opened against the backdrop of an illuminated Red Fort earlier this week on Tuesday.

It was only after the recent Delhi Disaster Management Authority (DDMA) guidelines relaxed prohibition on social gatherings for the festive season that the producers, directors, and artistes knew that they would be performing in the Lal Qila like they used to before. 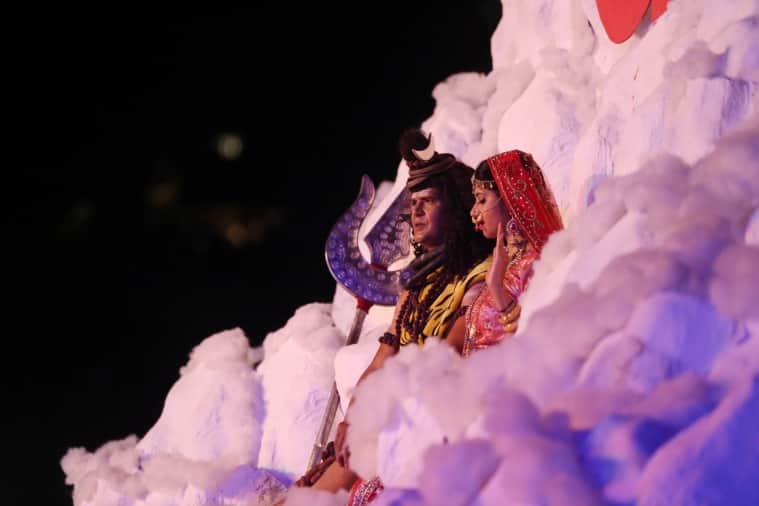 Organised by the Lav Kush Ramlila Committee, which has been holding the event at the Red Fort for years, the programme will take place from 6 pm to 12 pm every evening for the next 11 days. Earlier, there would be three Ramlilas and a ‘mela’ with thousands of visitors on the grounds. But that has changed. While there were around 300 artists, fewer seats were occupied on Tuesday evening.

Amit Ghanshyam, an actor who plays Narad Muni among other roles, said, “Nothing has changed besides the size of the event.” Pointing to the stage and lights, he said planning was done in just a week.

All the artistes have taken at least one dose of the Covid-19 vaccine, while organisers said both doses are preferred.

Naveen Chella, director of Ramlila, said, “We were sure we would be performing only earlier this week.” While there was little time to prepare than usual, he added that no compromises were made with regard to costumes, sequences, lighting etc.

Behind the stage, the makeup and dressing rooms had been set up. Samiksha Bhatnagar, a TV and theatre actress, got ready to portray Sita in the Ramlila for the first time. Speaking to The Indian Express on Tuesday, she said, “We have all faced a lot of trouble in the last one-and-a-half years. In the last few months, we were emotionally and mentally recovering from the pandemic.”

Regarding the last-minute preparation, she said, “We had the script, but we learnt that it was taking place in the Red Fort only two days ago.”

Sharad Ghore, who plays Hanuman, said the nature of their work has changed immensely and this was his first live performance in two years: “Ever since the pandemic began, I started doing voice modulation practice, reading books and other acting exercises at home. Even most auditions take place over video. It is nice to be on a stage after so long.” 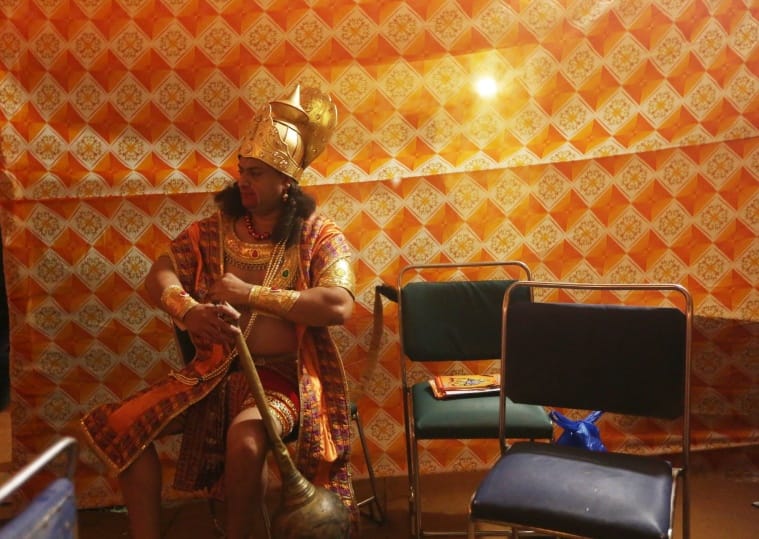 While many actors flew down from Mumbai, some of the actors and dancers were locals.

For those who play smaller roles, too, the pandemic has not been easy. Vinay Bhagat (41), who considers this his ‘passion’ and works in the hotel industry, said, “I have not performed in the last two years. This has always been a hobby. At home, I practice lines with my daughters. They keep asking me to recite a few lines from the Ramlila.”

His last performance was in 2019. A few of his companions said they practice lines and dialogues over WhatsApp.

Setting up in a short time was a task for the labourers too. Tapan (40), a labourer, said preparations would usually take at least 30 days. “This time, we set up everything in the last four days. We have been working all day. But it’s good because most of us have been unemployed for the last two years,” he said. He went back to his hometown in West Bengal’s Medinipur during the lockdown in 2020 and 2021.