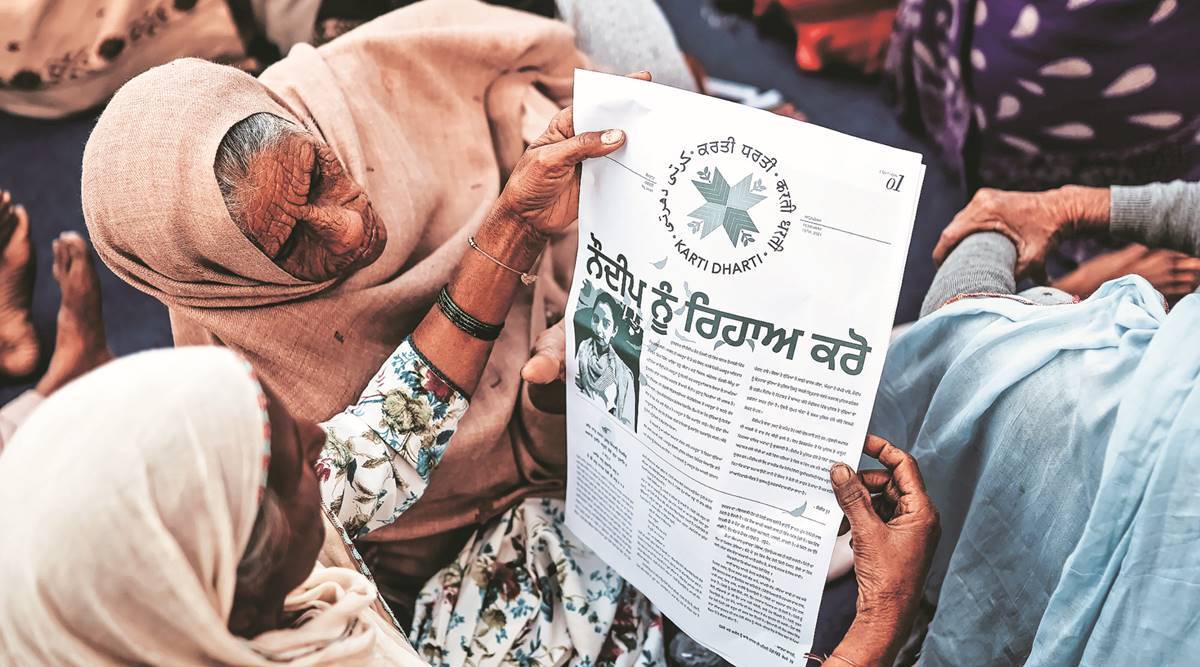 The four-page, A3-sized newsletter in Punjabi and Shahmukhi, founded and edited by social activist Sangeet Toor, is the collective and conscious effort of a team of women and was launched a couple of weeks back. Of the women, by the women, but not only for the women… ‘Karti Dharti’ is a newsletter that gives ‘free and equal’ space to the stories and narratives of women who are an integral and indispensable part of the on-going farmers’ protests.

The four-page, A3-sized newsletter in Punjabi and Shahmukhi, founded and edited by social activist Sangeet Toor, is the collective and conscious effort of a team of women and was launched a couple of weeks back.

“We believed that the role and effort of women participating in the agitation, directly and indirectly, needed a comprehensive platform, and what better than the written word,” shares Toor, who writes extensively on women and labour issues, is a Master’s in Cyber Security from George Washington University in the USA, and has been at Singhu and Tikri borders for months now.

Designed by Navjeet Kaur, funded by Sargam Toor, the name ‘Karti Dharti’ is the brainchild of Nausheen Ali, a Professor at New York University, with several other women members contributing anonymously.

“With young women who are part of the women being targeted, some decided to remain in the background. As we spent weeks on the ground, spending a lot time with the women here, and also the villages around Singhu and Tikri, we discovered a treasure of stories, unique viewpoints and outlooks that needed to be shared with the outside world and a larger audience, for instance the many dimensions of farm labour in this movement. As part of a digital talk I did on the invitation of the Young Lyallpur Historian’s Club in Pakistan, I was asked if there was any newsletter by the women and on them, and at that moment, I knew we had to document it all, and so ‘Karti Dharti’ took shape and form. The hope is that it will build bridges and it is being circulated not only at the protest sites, but many morchas of Punjab,” shares Toor, who resides in Mohali.

Toor, as part of her work with the newsletter, shares how women in Punjab’s villages are politically more aware than their urban counterparts and that’s precisely why their organisational skills in the protest are so defined and clear. From mobilising women in villages, collecting ration, milk, organising langars, taking the stage to talk about the importance of the agitation, collaborating with other women to take out jagos in their areas, helping in the collection of medicines, and other essentials and motivating people to contribute to the cause…women have been on the forefront.

“While I am also involved with Trolley Times, a newspaper by a team of activists on the borders, we felt that we needed an exclusive platform for women,” Toor says, as they are a small team, they hope to take out two issues in a month. Encouraging the women to write, Toor says that apart from political and social pieces, the newsletter has articles on their opinions on politics, changing roles, impact of technology on farming, need for change in agricultural policies and role of women labour unions in Punjab.

“There are so many issues that need to be talked about, with women farmers and woman labourers fearlessly braving so many odds and leading several morchas. Karti Dharti will be a voice for issues that are not only limited to the farm laws, but consume the common people and will hopefully initiate new dialogues. Many of the women in Punjab’s villages and towns are voracious readers of Punjabi newspapers, very aware of the political and social situations, so we wanted to have a print edition, one they could touch, feel and own.”