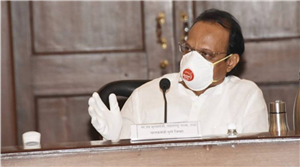 Deputy Chief Minister Ajit Pawar, while speaking to the media, said the government will discuss its stand on the vaccination drive from May 1 in the cabinet meeting. The state government is likely to take a decision on free vaccination to people and the extension of lockdown in the state after a discussion in the state cabinet meeting on Wednesday.

Deputy Chief Minister Ajit Pawar, while speaking to the media, said the government will discuss its stand on the vaccination drive from May 1 in the cabinet meeting. “It has been decided to bring the issue (of free vaccine) in the state cabinet. I have signed the proposal and it has now gone to the CM for his signature. Then, it will come up in the cabinet wherein all our colleagues of the MVA government will put forth their views on it. After hearing all, chief minister will announce the right decision in the interest of the people,” said Pawar.

Maharashtra has 5.71 crore people in the age group of 18 to 44 and will require 12 crore vaccine doses. Asked about the financial burden of the vaccination on the state government, Pawar said the government will decide on it on Wednesday. “Actually, it is the responsibility of the Centre to vaccinate all people. But the Centre’s stand on it is not clear and we are following it up with the Centre,” Pawar added.

State health minister Rajesh Tope said the approximate cost of the vaccination for the age group of 18 to 44 will be over Rs 7,500 crore.

On April 25, NCP minister Nawab Malik said the state government wanted to make the vaccine free for those aged 18 and above. A formal decision will be announced by Chief Minister Uddhav Thackeray on May 1, he added. State tourism minister Aaditya Thackeray, who tweeted about the free vaccine, however, later deleted it and put out another tweet stating that, “The official policy of vaccination will be declared by the empowered committee and we must await its recommendation for a fair policy for all sections of society.”

The state cabinet will also discuss whether to extend lockdown after May 1. “Though Covid cases are dipping in Mumbai and Thane, the same trend is not being seen in rural parts of the state, such as Marathwada and Vidarbha. The lockdown is in force till May 1. In tomorrow’s cabinet, the discussion will take place and the decision will be made on whether to extend lockdown by a week or two,” said Vijay Wadettiwar, relief and rehabilitation minister.

Over the past three weeks, the state government has gradually increased restrictions by making them stricter last week, which are in force till May 1.