Mayor Kulwant Singh said that the grant was issued with the effort of the house and he did not want to get into a fight to claim credit for the funds. 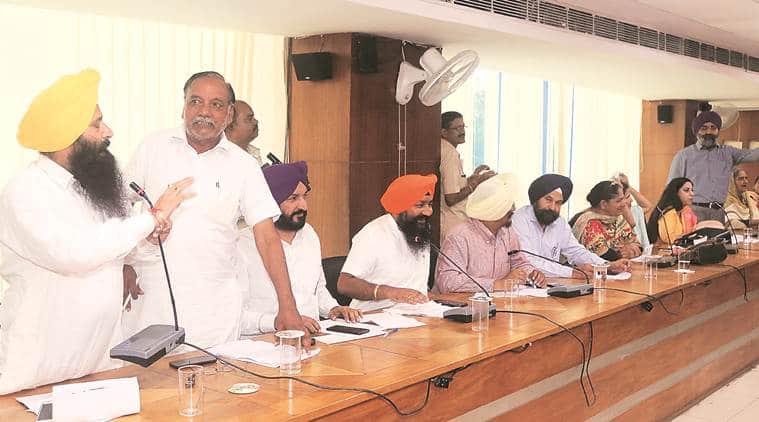 Upheaval marred the general house meeting on Tuesday, as SAD councillors accused Punjab Health Minister Balbir Singh Sidhu of taking credit for issuance of the grant for carrying out development work in the city. On the contrary, the Congress councillors, opposed the SAD councillors and accused the mayor of taking illegitimate credit for the minister’s work.

SAD councillor Parwinder Sohana raised the issue soon after the house meeting started. He was joined by another party councillor RP Sharma, following which, the councillors raised questions over the press conference held by Balbir Singh Sidhu on Monday. They claimed that it was with their efforts that the state government had released a grant of Rs 2.41 crore.

R P Sharma said that Sidhu did not attend the meetings of the house as he was an ex-officio member, thus, he should not claim that the grant was issued because of his efforts. He alleged that Sidhu was trying to befool people by taking credit.

Meanwhile, mayor Kulwant Singh said that the grant was issued with the effort of the house and he did not want to get into a fight to claim credit for the funds.

The state government had released funds worth Rs 54.55 lakh for development work, while the rest of the amount is yet to be released. The mayor had said that Rs 30.58 lakh was sanctioned for carrying out repair work in the parking area behind the PCA Stadium, Rs 23.11 lakh for Sector 66 Mandi Board Society, Rs 40.60 lakh for the works at Phase 10 market, Rs 2.5 lakh for Police Colony at Phase 1 and Rs 21.71 lakh for construction of park at Phase 6. Suicide and triple murder in Manimajra: Chandigarh businessman had filed complaint against 4 who didn’t return his money