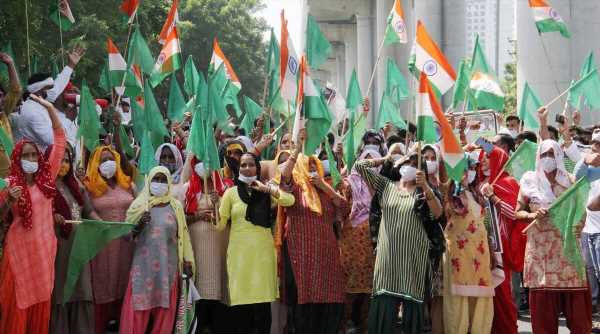 Officials said that road, as well as, rail traffic is likely to be affected on Monday with farmers having already declared that they will protest on highways as well as on railway tracks. A bunch of new slogans has been issued to farmers to be chanted during Monday’s Bharat Bandh that has been called by the Sanyukta Kisan Morcha (SKM) and has so far seen support from the Aam Aadmi Party (AAP), the Congress, and the SAD-BSP combine.

The SKM has so far categorically stated that though all political parties have been asked to support Monday’s strike, none of them, or their representatives, will be given any space on the farmers’ stage. They, however, can, set up their own stages in support of the farmers.

On Sunday the new bunch of slogans issued to the farmers included “Modi karega mandi band, kisan karega Bharat bandh“, and “Narendra Modi kisan virodhi“. Dr Darshan Pal, a member of the SKM said, “We appeal to everyone to support our bandh. We will, however, ensure that no markets or shops are closed forcibly. There is no place for violence in our movement. Sunday also marked the completion of ten months of farm agitation against farm laws at Delhi borders.”

Kavita Kuruganti, another SKM member, added, “Farmers from across the world are supporting us. They even observed a protest in New York when Prime Minister Narendra Modi visited there recently. Over 600 farmers have died during the protest morcha against farm laws so far.”

According to the SKM, the Bharat bandh will be from 6 am to 4 pm on Monday. “The SKM has appealed to all government and private offices, all educational and other institutions, all shops, industries, and commercial establishments to remain shut on Monday. They have also stated that no public event or functions should be organised during the day while adding that public and private transport should also stop functioning during the period of the bandh,” said Dr Darshan Pal.

Administration officials said that road, as well as, rail traffic is likely to be affected on Monday with farmers having already declared that they will protest on highways as well as on railway tracks.

The All India Bank Employees Association has already supported the bandh, while the Shahi Imam of Punjab, Maulana Usman Ludhianvi, too, having thrown his weight behind the strike call. Ludhianvi has issued an appeal to one and all to support this bandh.

The SKM has however stated that all emergency establishments and essential services — including hospitals, medical stores, relief, and rescue work, and people attending to personal emergencies — will be exempted from Monday’s bandh.

Jagmohan Singh Patiala, general secretary of BKU-Dakaunda, said, “The Samyukta Kisan Morcha appeals to every Indian to join this nation-wide movement and make the Bharat Bandh a success. In particular, we appeal to all organisations of workers, traders, transporters, businessmen, students, youth and women, and all social movements to extend solidarity with the farmers on that day.”