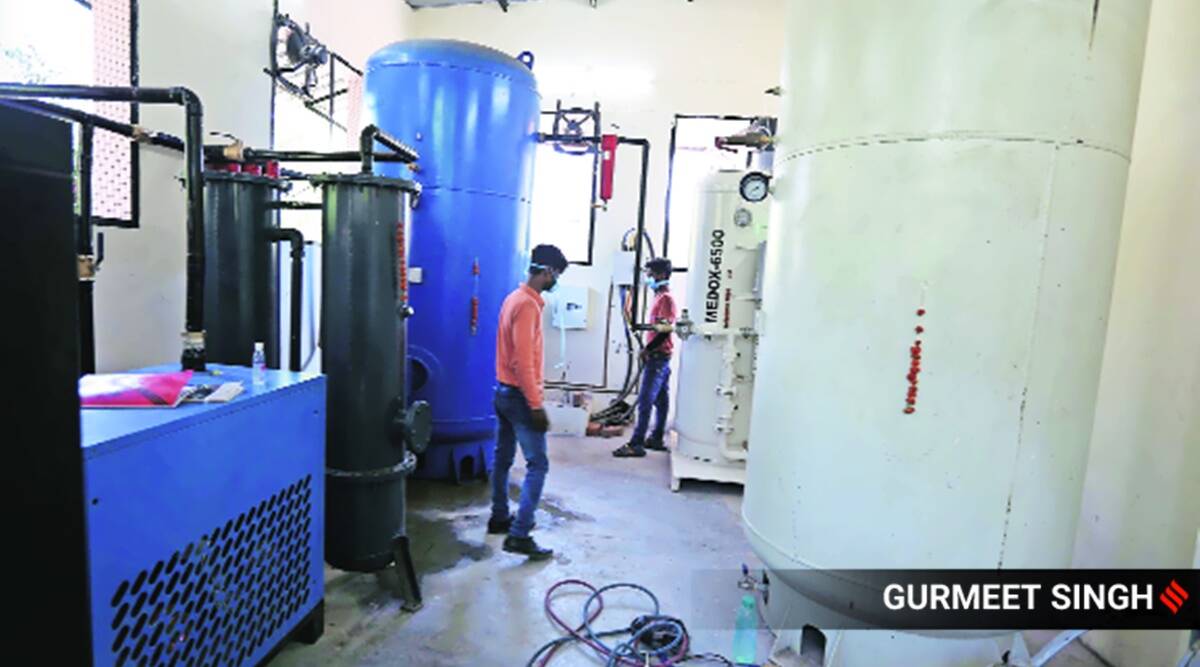 Interestingly, PM Cares Fund had allocated Rs 201.58 for installation of 162 dedicated pressure swing adoption (PSA) medical oxygen general plants in January itself out of which 2 will be installed in Punjab, but that work is still pending. Punjab’s oxygen refilling plants, which have a capacity of 41 metric tonnes per day, are facing a constraint in oxygen supply from Baddi in Himachal Pradesh and Panipat in Haryana since Wednesday morning.

Apart from oxygen refilling, Punjab has in house manufacturing of oxygen through air separation units (ASUs) which comes out to be 80 metric tonnes per day.

The supply issues for refilling plants continued even on Friday, forcing the units in Bathinda and Amritsar to meet their respective DCs to flag the issue.

Sukhdeep Singh Bhullar, who is associated with the Amritsar-based oxygen cylinders refilling unit, said, “We used to supply around 64 tonnes of oxygen per month to both hospitals and industrial units. We get it (oxygen) from Baddi and Panipat and later it is refilled and supplied. However, now we are not getting the supplies, but the manufacturer assured that he will try his best to provide supplies. We have taken up the matter with the industry department and Amritsar DC as well. However, it is the condition of all the refilling units of Punjab.”

Another Bathinda based refilling unit owner said, “In September last year, we faced a temporary crisis but it was manageable as all the states did not face an outburst of Covid patients. However, this time, the situation is different. However, Punjab refilling units are not the only ones. Hence, we are trying our best to get supplies. ”

Bathinda DC B Srinivasan said, “We have one manufacturer of medical oxygen as well in Bathinda and we will purchase from him. No doubt, refilling units in the district are facing a problem in supplies.”

The daily medical oxygen requirement of state’s hospitals is in the range of 110- 120 MT, while Punjab hospitals have the capacity to store 300 MT LMO. So, Punjab CM had sought an interrupted supply of 120 MT oxygen daily to Punjab apart from what it is being produced in house.

Meanwhile in Bathinda, dismantling of thermal plants is going on and it is using oxygen on a daily basis for gas cutting and other processes. Gursewak Singh, president of Guru Nanak Thermal Plant Employees Union, Bathinda said, “Instead this daily industrial supply of oxygen should be sent to hospitals.”

Rajinder Singh, owner of PECTHERM oxygen plant, said, “You can produce oxygen with a purity of up to 95 per cent directly onsite. However, very few hospitals are taking this initiative. This will save transportation of oxygen cylinders from here and there. In Ludhiana, one private hospital Aastha hospital has installed this on site medical oxygen manufacturing plant and we also installed one in Siachen.”

Interestingly, PM Cares Fund had allocated Rs 201.58 for installation of 162 dedicated pressure swing adoption (PSA) medical oxygen general plants in January itself out of which 2 will be installed in Punjab, but that work is still pending.