The nurses withdrew the protest by midnight after state Health Minister Ma Subramanian had assured them that he would hold talks with their representatives and listen to the demands on Monday. Nearly 800 nurses hired temporarily for Covid-19 duty protested at the Director of Medical and Rural Health Services (DMS) campus in Chennai on Tuesday demanding their jobs be made permanent. The nurses withdrew the protest by midnight after state Health Minister Ma Subramanian had assured them that he would hold talks with their representatives and listen to the demands on Monday.

At the protest site on Tuesday, the nurses carried placards and raised slogans urging the government to take immediate action. They said they worked during the pandemic risking their lives to save patients and now they have been pushed to a situation like this. Some of them alleged that they were not even paid properly in this period and they are asking for their basic rights. 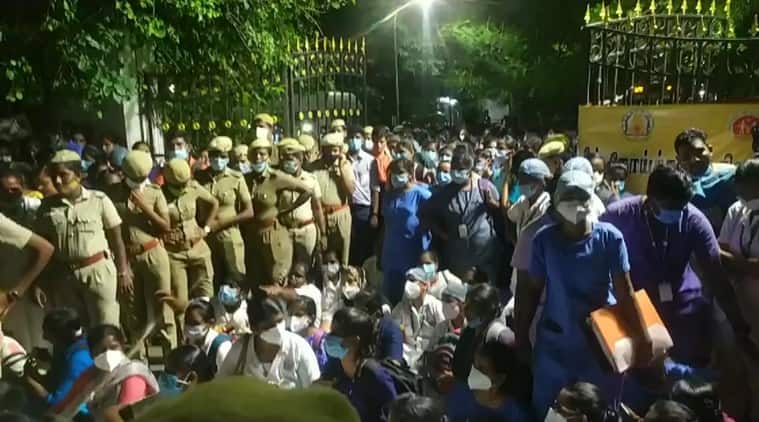 Dr GR Ravindranath, the general secretary of Doctors Association for Social Equality, who was present at the protest site on Tuesday, said the representatives have placed two demands.

“The government appointed 3,000 nurses who had cleared the Medical Services Recruitment Board (MRB) exams for Covid-19 work when the pandemic was at its peak. The nurses were hired on a temporary basis but they continue to do their services even now. A few days ago, a government order was served to move the nurses from the control of DMS to district collectors. This has sort of created a panic among the nurses and they believe the decision would be a threat to their job security. They demand the government to scrap the order and also to make them permanent employees,” he said.

Politicians, including Makkal Needhi Maiam leader Kamal Haasan, extended their support to the nurses. Haasan visited the campus and said the job of a government is to increase the employment opportunity and not to close the existing ones.

“Many people are alive today because of the nurses’ services during the Covid-19 pandemic. They are still helping the patients under treatment. The government should not think that the pandemic is over and their services are longer required, it’s not fair. Their demands are fair, we require their service,” he said.