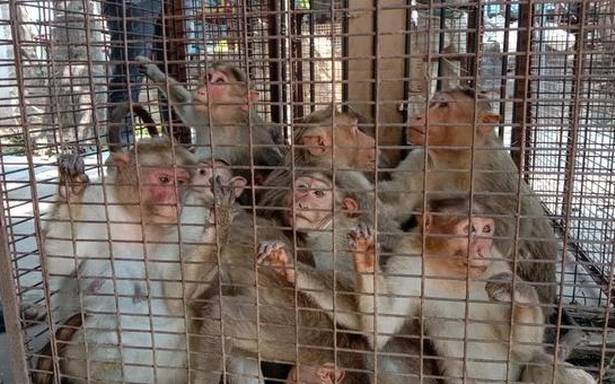 Forest and Veterinary officials carried out the operation, after testing the animals

Officials of the Forest Department released about 100 monkeys detained in cages in the town. The released monkeys were in good health condition, the officers said.

Following complaints from the public that monkeys were attacking them and causing nuisance in Tanuku town and the nearby areas, the local municipal officials reportedly caught the animals and detained them in cages. They arranged staff to take care of the animals.

However, members of the animal care and animal rescue team took the matter to the notice of West Godavari district Collector and the Forest Department authorities, who swung into action on Thursday. The animal rescue team members argued that monkeys will die due to lack of food and water, if detained in cages, and urged to release them immediately.

The Forest and Municipal officials along with the veterinary doctor visited the monkeys at Kommai Cheruvu Gattu area, where they were kept. Veterinary doctor Jayapal said all the animals were in good condition, said Divisional Forest Officer (DFO-Wildlife Management) C. Selvam.

“The monkeys were shifted to Dubacherla in vehicles, and were released into nearby forests. There is monkey menace in some areas. Public can drive them away, but should not detain and torture the animals,” Mr. Selvam said.