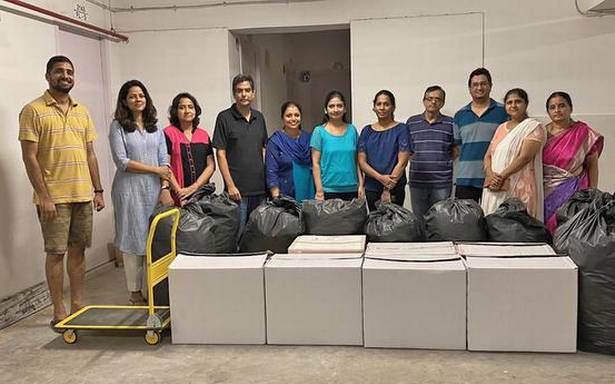 A gated community adds the joy of giving to its Deepavali celebrations. It is running a clothes collection drive that ends today

Residents of Trellis South, a gated community on Arcot Road in Vadapalani, has torn this assumption apart driving a coach and horses through it, and one may add, transporting “bags of clothes” to the needy in the process.

For a community that has spent much of its life behind closed doors, sheltering in place and following COVID-19 SOPs, its members have been hugely impressive as they go about promoting a cause with the synchronicity of rhythmic group-gymnasts.

When one resident of this two-year-old community suggested that they spice up Deepavali with some good, old-fashioned charity — cloth collection — the community rallied around the thought.

As on Friday morning, the community had amassed 18 bags with the contents reading as: New or almost new clothes; old clothes; and three, kid’s toys and stationery items.

The initiative which got under way on October 24 would run its course at 12 noon on October 31, when the collected clothes would be on the way to three organisations known for distribution and repurposing of old clothes for the underprivileged through thrift stores or for free — Thuli, Little Drops and Banyan.

Ravi Swaminathan, “onboarded” into the gated community only in January 2021, initiated this idea among his neighbours, even carefully flipping through the track records of organisations engaged in cloth distribution before settling on the three.

With the Trellis South Flat Owners’ Association throwing its weight behind the initiative, Ravi wasted no time in attending to the nuts and bolts of it, which included mobilising volunteers.

There are 15 volunteers who shoulder responsibilities of the drive. Ravi points out that the entire community is driving the initiative.

Here is an illustration.

Separate boxes were assigned for the three categories. Two days into the drive, the generosity overflowed and the box for old clothes could not contain it.

“That box had to be replaced with a barrel, which the association president provided,” recalls Ravi, adding that in the days that followed, the continuing generosity necessitated the use of huge bags.

On Friday, the collection weighed at 18 capacious bags.

At the time of this article going to print, an assembly of volunteers attended to the work of sorting out the clothes, weeding out those that would not do much for the dignity of the receiver.

“A similar exercise was carried out on Wednesday (October 27).”

Next week, after the three organisations have received their respective consignments, the volunteers are slated for a visit to each of them.

Ravi reveals that this exercise is planned for the benefit of the residents who donated these clothes — to give them a picture of how their gesture is making a difference.

Asked whether the Trellis South drive would accept clothes donated by people outside the community, Ravi says: “We are keeping it internal as mobilising resources is a challenge. Relatives of Trellis South residents who live elsewhere are also donating clothes, and the volunteer-resources are just sufficient to meet the overall workload.”

To reiterate a point, for a young community many of whose members have not met their neighbours in any meaningful in-person gatherings, the team-work is remarkable.

Interestingly, Ravi is a management professional who has occupied leadership positions for two decades and is currently managing director for the India operations of a Japanese multi-national company. One may assume that he is bringing to the drive principles governing effective remote functioning and human-resource mobilisation.