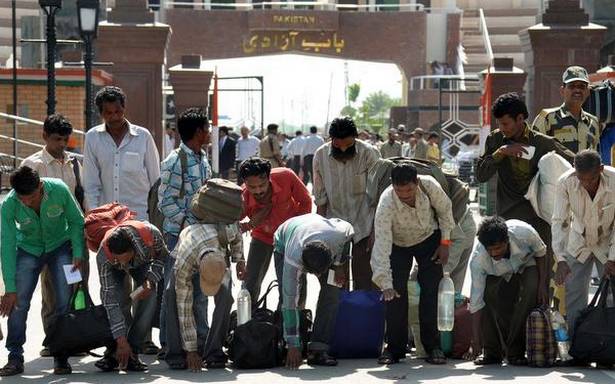 They are being released after completion of their jail term.

A week after killing an Indian fisherman in a firing in the mid-sea by the Pakistan Marine Security Agency (PMSA) on November 6, Islamabad will release 20 fishermen lodged in Landhi jail in Karachi on Sunday and will hand them over to the Indian authorities the next day at the Wagah border.

The fishermen to be released are from Gir Somnath and Porbandar districts of Gujarat. Before the mid-sea firing incident on a fishing trawler Jal Pari, India had released 10 Pakistan fishermen jailed in Gujarat on November 2.

On November 6, the PMSA had in a rare act allegedly chased and fired at Jal Pari, which had six fishermen aboard, while it was fishing at the Arabian Sea off the Gujarat coast.

Shreedhar Chamre, a fishermen from Palghar in Maharashtra, was allegedly killed in the firing while Dilip Solanki, captain of the fishing boat was wounded. Six others on the boat were reportedly abducted and taken to Pakistan.

The fishermen to be released were apprehended by the PMSA for allegedly crossing over to the Pakistan side of the International Maritime Boundary Line (IMBL) off the Gujarat coast during deep sea fishing.

They are being released after completion of their jail term.

“Even after the release of the fishermen, there are still around 600 fishermen, mostly from Gujarat and the Union Territories of Diu and Daman, who are languishing in the jails in Pakistan,” said Manish Lodhari, a prominent activist and chief of the Marine Fisheries Cooperative Society in Porbandar.

He and other activists working for the welfare of the fishermen demand that both countries must voluntarily release the fishermen lodged in each other’s jail.

“There are 62 Pakistani fishermen in jail in Gujarat,” said Jivan Jungi, another activist from Gujarat.

According to Mr. Jungi, the nationality of 376 of the 600 fishermen has been confirmed by India and they must immediately be released and repatriated. The 20 fishermen are among the 376.

The boats are lying anchored at the Karachi harbour.

“Each boat is worth ₹50 lakh totalling approximately ₹600 crore. The Indian Government must work with the authorities in Pakistan to get the boats, which are mechanised trawlers used in deep sea fishing, released and handed them back to their rightful owners,” Mr. Lodhari told The Hindu.

With almost 1,680-km long coastline, Gujarat is among the largest fisheries producing States. There are around 25,000 boats registered for fishing and almost 2.5 million people directly and indirectly dependent on related activities.

According to Mr. Lodhari, an average 75-90 Indian boats are apprehended by Pakistan’s national agency every year. Since 2003, only twice less than 100 boats were released by Pakistan — in 2014 and in 2017.

Both India and Pakistan have been engaged in detaining fishermen due to the dispute over the alignment of the IMBL in the Arabian Sea.

From Pakistan side, it’s national agency PMSA apprehends a few hundred fishermen along with their boats while the Indian Coast Guard and other security agencies detain a few dozen Pakistani fishermen.

The detained fishermen are then handed over to the local police who lodge them in jails while initiating proceedings against them for violating laws. They are periodically released and repatriated after completion of jail sentence and establishing of nationality.