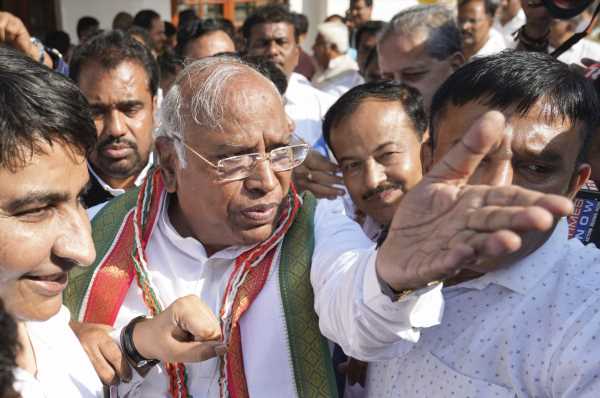 ‘If the Congress gets to form the government in 2024, then Sonia Gandhi by virtue of being CPP chairperson will have the authority to decide who will be the prime minister and not Kharge.’

Mallikarjun Kharge may have been elected Congress president, but how much power will he really wield?

Will he have the power to make crucial organisational changes in the Congress party?

How will he handle the three Gandhis who are powerfully entrenched within the party — Sonia, Rahul and Priyanka?

Or will he be a gloried front office manager while the Gandhis continue to call the shots in the Congress party?

“If the Congress wins in Himachal or even Karnataka from where Kharge comes, if he wins these two states, his position in the party will certainly become stronger,” Rasheed Kidwai, veteran Congress watcher and author of 24 Akbar Road and Sonia-A Biography, tells Syed Firdaus Ashraf/Rediff.com.

What will be Mr Kharge’s role as Congress president?

Yes, we will have to wait and watch.

Will he have the authority to appoint his own political secretary?

Will he have the authority to remove the AICC general secretary (organisation), K C Venugopal?

Will he be able to appoint a treasurer for the Congress party?

So will Kharge be a rubber stamp president of the Congress party?

It is naïve to pre-judge him. We need to see what he does.

Look at Sitaram Kesri, former president of the Congress party. He was appointed after P V Narasimha Rao resigned as Congress president in January 1996.

He was exercising his power. He organised the Calcutta plenary of the party and then he did the CWC elections. He also nominated 12 CWC members.

It was only in December 1997, when Sonia Gandhi announced that she was joining active politics, that Kesri became a lame duck Congress president even though he continued till March 1998.

All the decisions were taken by Sonia Gandhi through Vincent George and Oscar Fernandes who used to come to Kesri to obtain his signature.

His ouster was also orchestrated virtually by everyone in the CWC then, except Tariq Anwar.

Pranab Mukherjee, Dr Manmohan Singh, Rajesh Pilot, Jitinder Prasada and Madhavrao Scindia… all of them had plotted against Kesri.

It is not that Sonia Gandhi alone ousted Kesri as she got the support of each and every CWC member.

Now, it all depends on how Kharge acts when he starts functioning as Congress president.

In Kesri’s time he had to face only one Gandhi and that is Sonia Gandhi.

What makes the CPP chairperson so powerful?

As per the Congress parliamentary party constitution, Sonia Gandhi has the right to appoint the leader of the party in both Houses of Parliament.

And say by chance the Congress gets to form the government in 2024, then Sonia Gandhi by virtue of being CPP chairperson will have the authority to decide who will be the prime minister and not Kharge.

How did she become the CPP chairperson?

She was not a member of either House (of Parliament) then. At that time, Pranab Mukherjee amended the CPP constitution and Sonia Gandhi was empowered to appoint the Lok Sabha leader of the party and she went on to appoint Sharad Pawar though technically Kesri was Congress president.

Now, there may be a move after Kharge’s appointment that Sonia Gandhi may be empowered with the right to appoint the Congress Legislature Party leader too. And if this happens, then this will further dilute Kharge’s authority.

Why did Congress party members vote for Kharge, a de facto Gandhi appointee, despite knowing that the Gandhi brand name does not deliver much political returns?

There are two types of Congress. One is the workers of the party, sympathisers and activists.

And second, there are 150 people in the party who matter.

They are the Pradesh Congress Committee chiefs, the Congress legislature party leaders in 29 state assemblies who are the most influential people who matter in the Congress. They are the stakeholders.

They want continuity of leadership and do not want change.

A change means threat to the post and position that they are holding.

Even Madhusudan Mistry, who conducted the Congress presidential election, has been appointed by Sonia Gandhi.

And mind you, Sonia Gandhi has been ruling the Congress party for the last 8,000 days. In between Rahul Gandhi stepped in from December 14, 2017, only to resign on May 25, 2019. After that again Sonia Gandhi continued.

So today whoever is holding a post in the Congress today has been appointed either by Sonia Gandhi or Rahul Gandhi.

Can Kharge can take on Prime Minister Narendra Modi in the 2024 Lok Sabha election?

The 2024 elections won’t be Kharge versus Modi because Kharge is being appointed to look after party affairs. He will be meeting party delegates and legislatures of different states for party affairs.

What will matter is that if the Congress wins in Himachal or even Karnataka from where Kharge comes, if he wins these two states, his position in the party will certainly become stronger.

How he acts like a team leader will have to be seen for now.

We must not undermine Kharge. His candidature defused the G-23 (the rebel group in the Congress).

It is ironical. Shashi Tharoor was part of G-23 and when Kharge filed his nomination the most prominent faces of G-23, Anand Sharma and Manish Tewari, were on Kharge’s side.