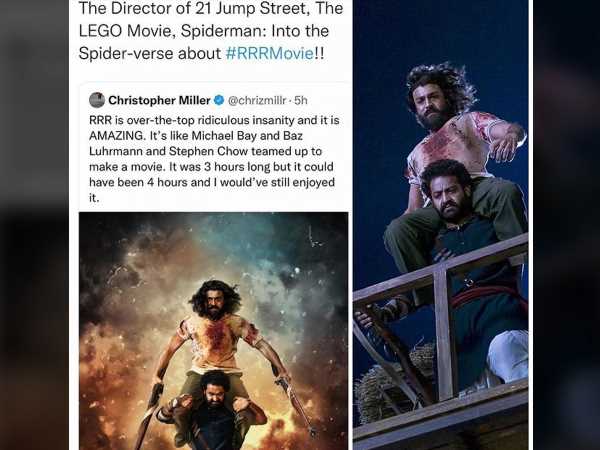 The actor and writer Christopher Miller, Disney and Marvel illustrator Alice X Zhang, film and TV writer Amy Paulette Hartman and many more Hollywood celebrities have showered praises on SS Rajamouli’ directorial venture RRR that stars Jr NTR and Ram Charan. SS Rajamouli ‘ film RRR is still winning the hearts of audiences. Since its OTT debut, the movie has reached to the Western countries. Recently, Christopher Miller, the director of 21 Jump Street, and The Lego Movie RRR and appreciated it. He took to Twitter and wrote, “RRR is over-the-top ridiculous insanity and it is AMAZING. It’s like Michael Bay and Baz Luhrmann and Stephen Chow teamed up to make a movie. It was 3 hours long but it could have been 4 hours and I would’ve still enjoyed it.”

RRR  which has earned Rs 223 Cr at the worldwide box office, now holds the record for the biggest first-day opening in Indian cinema and  SS Rajamouli broke his record set by Baahubali: The Conclusion, which minted Rs 217 cr worldwide on its opening day.

Jr NTR and Ram Charan starrer RRR, which is bankrolled by DVV Danayya,  is the highest-grossing Indian film since the  Coronavirus pandemic started  and the third highest grossing movie overall.