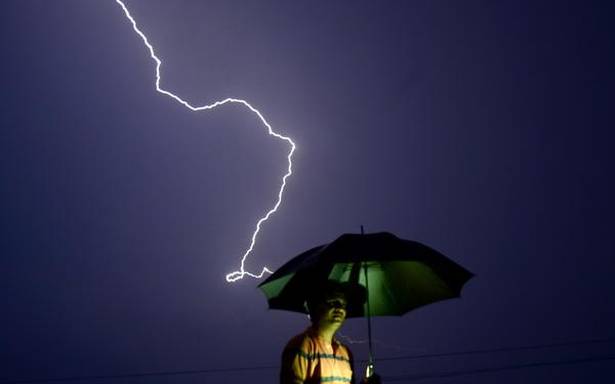 The top five states with the most lightning last year were Tamil Nadu, Andhra Pradesh, Karnataka, West Bengal, and Odisha.

There was 22.6% increase lightning in India last year compared to 2019, according to the ‘2020 India Lightning Report’ released by Earth Networks, which operates the largest global hyperlocal weather network.

Karnataka and Maharashtra were among the top 10 States with the highest lightning pulse counts during 2020. Over 39.5 million pulses were detected in India last year by the company’s Total Lightning Network. Of these, 12,022,402 were dangerous cloud-to-ground strikes.

According to a release in Bengaluru on July 19, there were 7,447 Dangerous Thunderstorm Alerts issued in India, most of them were in Tamil Nadu.

“In 2020, India saw the highest concentration of lightning in May, June, and September because of the monsoon season. Although the rainfall average across India reached 109% [just 1% less than the 2019 average of 110%], the lightning increased by 22.6% compared to 2019,” the release said.

Severe weather and the dangers of lightning pose a great threat to the Indian population. India experiences extreme amounts of heat and moisture due to the country’s proximity to the equator and the Indian Ocean, contributing to severe and sudden thunderstorms throughout South Asia. According to a study by the National Crime Records Bureau, since 2001, 2,360 people die in India every year due to lightning, it added.