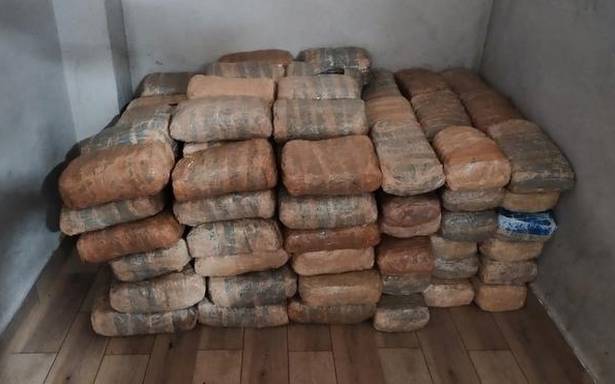 With the arrest of a 28-year-old man, Rachakonda police busted an inter-State gang that tried to smuggle 320 kgs of ganja from Andhra Pradesh to Karnataka via Hyderabad.

Acting on a tip-off, the Special Operations Team of Bhongir and Malkajgiri zones intercepted a goods carrier at Saroornagar and apprehended the driver, Metri Raj Kumar of Jambagi village in Aurad Taluk of Bidar district in Karnataka.

He was transporting the contraband drug from Gokavaram area of East Godavari district to Hyderabad. The seized material is worth ₹ 40 lakh. Police said that one Ranga Lal (25) of Border thanda of Bidar, who is the recipient of the ganja is absconding.

According to the investigators, Raj Kumar migrated to the city four years ago and since then he was driving the goods carrier to transport fruits to the Kothapet fruit market from different areas. Later, he came in contact with Ranga Lal, and they hatched a plan to smuggle ganja.

After unloading pomegranates at Rajahmundry, in the wee hours of July 20, Raj Kumar went to Gokavaram, met Ranga Lal, and both loaded 152 packets of ganja in the goods carrier vehicle in the fruit crates and the former started for Hyderabad. Upon reaching the city, he was nabbed by the police.