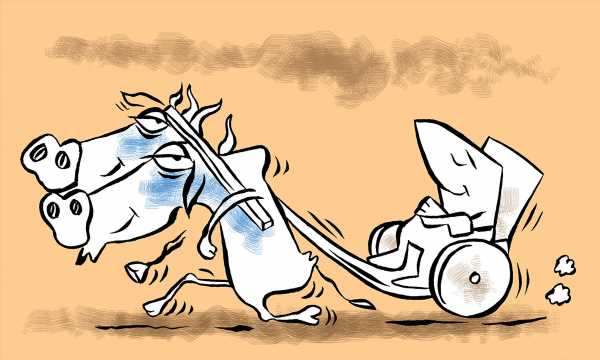 ‘Yet the market didn’t do all that badly because it was cushioned by domestic inflows.’

India’s outperformance over the past year is largely due to troubles in the developed world and China.

Two pivots — the US Federal Reserve’s downshift and relaxation of Covid restrictions in China — could lead to India’s underperformance, says Manishi Raychaudhuri, head of Asia-Pacific equity research at BNP Paribas.

In conversation with Samie Modak/Business Standard, Raychaudhuri says “This trend of ‘sell China, buy India’ is now playing out for other fundamental reasons.”

What has underpinned India’s outperformance over the past year?

Most likely, we will be entering a recessionary period, both in Europe and the US.

This is having a disproportionately negative effect on North Asia.

If you look at economies like South Korea or Taiwan, or even parts of China, they’re big exporters to the developed markets.

In contrast, India is largely a domestic economy. We do have about 18 per cent of the market in information technology services and that sector has underperformed.

But several large sectors of the market are still domestically focused.

Some large markets of North Asia have underperformed purely due to domestic policy-related reasons.

There was an avalanche of money moving out of emerging markets.

India wasn’t immune to that. Between October 2021 and June this year, $33 billion was taken out of India — the highest-ever.

Yet the market didn’t do all that badly because it was cushioned by domestic inflows.

Today, we are seeing possibly somewhere around 5-7 per cent of domestic savings of individual investors getting allocated to equities.

Several factors are at play here. The zero-commission brokerages, the awareness of the equity markets, and the financial investments in tier II and III cities.

Does the latest US inflation print change India’s outlook?

The fact that the US October Consumer Price Index-based inflation was below the consensus expectation of 8 per cent is an encouraging sign.

It has enhanced the expectation of a downshift in the Fed’s hiking trajectory in December.

Regardless of Fed action in December, BNP economists maintain their estimate of a terminal Fed rate of 5.25 per cent.

Consequent to the expectation of a Fed downshift and the recent steps taken by China to relax pandemic restrictions, we think foreign investor preferences in the near term may be concentrated in North Asia (rather than in India).

There are two pivots investors are awaiting with bated breath. The first is the Fed pivot.

The Fed has to unequivocally signal that it is getting out of the hawkish stance on monetary policy.

It’s unlikely to happen any time before the first quarter of next year.

The second is when China decides to move out of the zero-Covid policy.

For a broad-based outperformance of China and the rest of North Asia, we may have to wait a while.

India’s weighting in the global indices has been going up. Will it result in structurally strong foreign flows?

In the Morgan Stanley Capital International EM and the MSCI Asia (excluding Japan) indices, India’s weighting was about 10 per cent during early-2021.

Last time we checked, it was about 18-19 per cent. The weighting has almost doubled over a span of eight quarters.

That forces the traditional long-only funds to allocate more money to India.

Also, this trend of ‘sell China, buy India’ is now playing out for other fundamental reasons.

There is, of course, a broader trend of not only buying India, but also buying South Asia, which includes Indonesia and Thailand.

How is the earnings growth playing out?

The consensus earnings estimates for India has declined as it has in the rest of the world, but significantly less than in North Asia.

In the case of India, the earnings estimates are still relatively stable.

The earnings volatility in India is far less than in the rest of the world.

Are valuations stretched for India?

Investors are now beginning to understand that on absolute basis, India is not really that overvalued.

The MSCI India Index 12-month forward price-to-earnings and price-to-book multiples are slightly higher than the long-term averages (about 18.5x and 2.75x, respectively).

It’s on relative valuations, compared to the Asian average, that India appears expensive — more than two standard deviations higher than the long-term average.

That’s because the North Asian markets’ valuations have collapsed.

Which sectors are you bullish on?

The most important segment of the India equity market is private sector banks and insurance. Automotive, particularly the market leaders in the four-wheeler categories.

We still have some weight on technology, media, and telecommunications.

There’s concern around the IT services companies’ order flows slowing down in the present environment of a developed market recession.

But their valuations have declined sharply, and the weakness of the rupee is an additional tailwind.

We are overweight on the oil and gas sector, particularly the conglomerates, and on a few consumer staples firms.

Which sectors are you underweight on?

We don’t have any exposure to the metal and mining sector.

Although we have marginal exposure to consumer staples, we are underweight on it because of expensive valuations and likely earnings estimate downgrades.

Input cost pressures, driven by currency depreciation, could weigh on margins and on consensus earnings estimates.