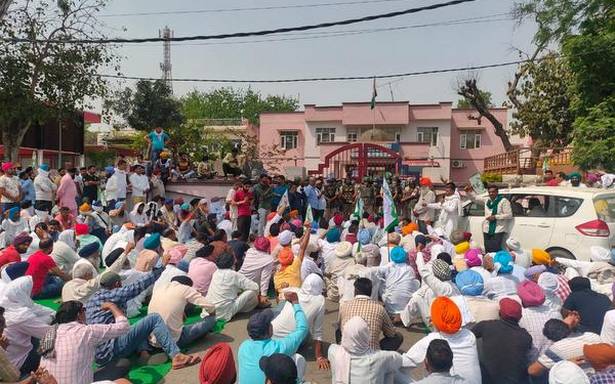 Four members of the Bharatiya Kisan Union (BKU) were arrested by Haryana Police on Wednesday on charges of attempt to murder under the Indian Penal Code, among others, for the alleged attack on the vehicle of Kurukshetra Lok Sabha member Nayab Singh during a protest a day ago.

A large number of farmers held a sit-in agitation outside Shahbad Police Station in Kurukshetra during the day in protest against the arrests.

Mr. Singh had gone to Majri Mohalla for a personal visit on Tuesday when BKU members gathered outside the house being visited by him to hold a protest. When the Member of Parliament got inside his car to return, the BKU members surrounded the vehicle, raised slogans and showed black flags to him. The protesters tried to pull Mr. Singh out from inside his vehicle and a few of them even sat on the bonnet of the car, said the police. They also smashed the rear windscreen of the car. Mr. Singh had a narrow escape, added the police.

The MP was escorted to safety by a police team.

Later, a case was lodged on charges of attempt to murder, wrongful restraint, rioting, unlawful assembly and causing hurt under the Indian Penal Code at Shahbad Police Station and four persons were arrested. Eleven people were named in the First Information Report, while eight to ten are unidentified. The police said they had a video of the incident clearing showing the protesters trying to pull out the legislator and smashing the windscreen of the vehicle.

Those arrested were produced before the court and sent to jail.

Local farmers and members of farmer unions across Haryana have been protesting against the participation of Bharatiya Janata Party (BJP) and Jannayak Janta Party MLAs in personal and official programmes in view of the ongoing agitation against the three farm laws. Mr. Singh is with the BJP.

Similar protests were held against Deputy Chief Minister Dushyant Chautala and Chief Minister Manohar Lal during their respective visits to Hisar and Rohtak earlier this month.