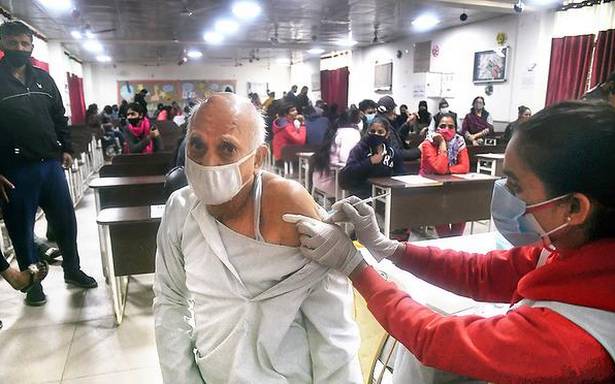 Most of the serious patients are those with comorbidities; doctors worried over staff testing positive

Doctors at three major private hospitals, where about 40%-50% of oxygen beds for COVID-19 are occupied, said though hospitalisation is increasing they are not seeing a rush of patients like in the second wave.

All of them said symptoms are still mild in most cases and patients, who are serious, are mostly the ones with comorbidities. They also said that staff testing positive is a challenge, but the hospitals are not stressed at this point.

Meanwhile, the surge in cases in Delhi continued on Monday with the test positivITY rate (TRP) increasing to 25%, which is the highest in seven months, according to a Delhi government bulletin.

More than 1,000 Delhi Police personnel, including an Additional Commissioner of Police-rank officer, have tested positive, officers said on Monday. Also, 46 prison inmates — 29 from Tihar and 17 from Mandoli — have been infected with the virus.

Dr. Sumit Ray, head, Department of Critical Care, Holy Family Hospital, said there is a slight rise in hospitalisation. “But it is much lesser than Delta (second wave). We are not overwhelmed. Only stress is the staff testing positive,” he said.

Dr. Rommel Tickoo, director, Internal Medicine, Max Hospital, said there is no huge rush like in the second wave and there is no stress on the system at this point. “If in Delta (second wave) seven out of 10 patients were serious, now it is only two out of 10. Hardly anyone is on steroids. Earlier, there was a huge rush at radiology for CT scan during the second wave. It is not there now.”

On Monday, 86.07% of a total 14,355 hospital beds for COVID-19 in Delhi were vacant and the percentage of vacancy was more in government hospitals. For instance, 81.8% of oxygen beds were vacant in Lok Nayak Hospital, the largest Delhi government facility.

During the second wave of the pandemic, beds at private hospitals had filled up before government hospitals and there is a similar trend in the current wave too.

All the three doctors said most of the severe cases are people with comorbidities.

Dr. Ray said symptoms are mainly in the upper respiratory tract and severe cases are mostly elderly people with comorbidities.

“About 80% of the cases are mild or asymptomatic. Also, recovery is happening in five days in most cases. In the majority of cases, people do not have symptoms related to lungs,” Dr. Tickoo said.