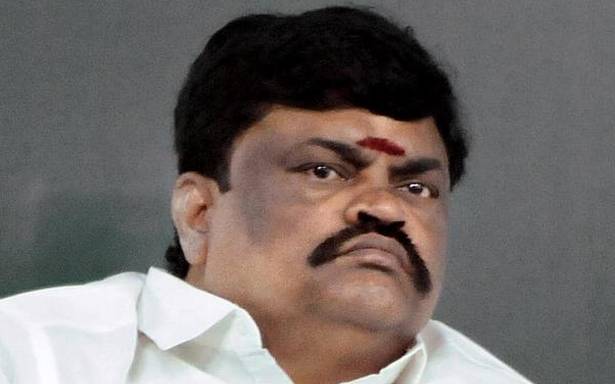 Police are trying to track him with his mobile phone signal

Six teams of the Virudhunagar district police have fanned out to different parts of the State and Bengaluru in search of former Minister K.T. Rajenthra Bhalaji in a cheating case.

The police are trying to track Mr. Bhalaji, who is the AIADMK district secretary, with his mobile phone signal and those of his close associates.

A police officer said the delay in getting the go-ahead for arresting Mr. Bhalaji, after the Madras High Court dismissed his anticipatory bail petition, gave him ample time to give the police the slip.

Mr. Bhalaji, who had held the portfolio of Milk and Dairy Development, has been accused of having collected huge sums from several persons promising them jobs at Aavin. In a specific case, S. Ravindran, a Sattur resident, alleged that he had given ₹30 lakh to Mr. Bhalaji through the then AIADMK functionary, Vijayan Nallathambi, and a party worker, Mariappan, for placing his relative at Aavin between November 2020 and February 2021.

Mr. Nallathambi filed a complaint, claiming that he had given around ₹1.60 crore to Mr. Bhalaji through his assistants, Baburaj, Balaraman and Muthupandi, for getting jobs for different persons.

As the news of the dismissal of his anticipatory bail application reached him, Mr. Bhalaji, who was addressing a protest meeting at Virudhunagar on Friday, suddenly left the venue. “He changed three cars and took rural roads,” a police officer said. He made good of the opportunity and travelled some crucial distance without watched by the police. By the time the police launched the search, he had gone far away.

However, the police ruled out the possibility of Mr. Bhalaji having flown abroad. “He is so familiar that he cannot get into any airport without being noticed,” the officer said. Plainclothesmen were also keeping a close watch at all airports in the State.

Six teams, including two Deputy Superintendents of Police and six Inspectors, were conducting the search. The police want to arrest him before the Supreme Court takes up his anticipatory bail application.