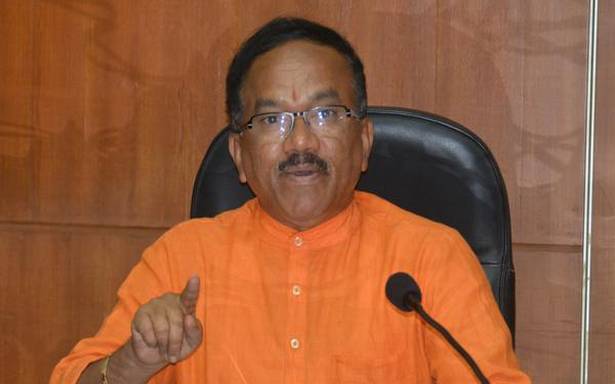 Fissures emerged within ranks of the Bharatiya Janata Party (BJP) in Goa a day after the party declared its list of 34 candidates, with former Chief Minister Laxmikant Parsekar and Public Works Department Minister Deepak Pauskar, both announcing their resignations from the saffron party on being denied tickets.

Also raising the banner of revolt were Isidore Fernandes – Deputy Speaker of the Goa Legislative Assembly and the incumbent MLA from Canacona – and Savitri Kavlekar, wife of Goa Deputy Chief Minister Chandrakant Kavlekar, who resigned as vice-president of the Goa BJP’s women’s wing. She will be contesting as an independent MLA from Sanguem.

Mr. Parsekar, who was Chief Minister of the coastal state between 2014 and 2017 (the period when the late Manohar Parrikar had to take over as the country Defence Minister) today announced he would contest as an Independent from the Mandrem constituency after he was denied a ticket in favour of the BJP’s incumbent Mandrem legislator Dayanand Sopte.

Mr. Parsekar, a former three-term MLA from Mandrem, had been trounced by Mr. Sopte in the 2017 Assembly election when the latter was in the Congress. Mr. Sopte later switched sides to the BJP.

An upset Mr. Parsekar, who conferred with his supporters late Thursday, is expected to formally resign from the BJP on Saturday.

Mr. Pauskar has already resigned as an MLA, as a Minister and from the BJP’s primary membership after he was dropped for the Sanvordem constituency, with the party fielding ex-MLA Ganesh Gaonkar in his stead.

Meanwhile, despite hitting out at the Congress for not doing enough to form an anti-BJP pre-poll alliance, the Trinamool Congress continued to poach leaders from the former with ex-Goa Pradesh Congress Committee member Mahadev Desai joining the TMC fold today along with his supporters. On Thursday, ex-Congress MLA Benjamin Silva, peeved with his party for not being given the Velim ticket, also had joined the Trinamool.

The Congress ally, the Vijai Sardesai-led Goa Forward Party (GFP), was plagued by internal rifts as well, with its MLA from Siolim, Vinod Paliencar, resigned today as he was upset with his seat being given to the Congress party instead of being kept with the GFP. The GFP is now down to just one MLA – its party leader Mr. Sardesai.