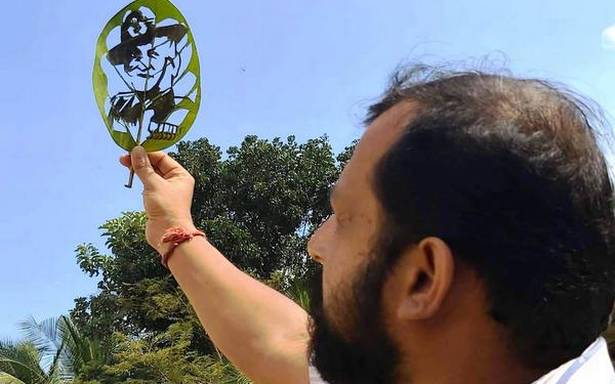 Rajendran Vadakkepadath sketches the late CDS in his trademark style

Shock and grief overwhelmed leaf artist Rajendran Vadakkepadath when the news about the tragic death of India’s first Chief of Defence Staff, General Bipin Rawat, in a helicopter crash near Coonoor came on Wednesday afternoon.

A fan of General Rawat, Mr. Rajendran had been mulling the idea of sketching the General in his trademark plantain leaf, an artistic process that would take many days.

With a sunken heart, Mr. Rajendran went out of his house and plucked a full-grown leaf of a banyan tree next to his house. His artistic fingers did not rest until he gave life to his military hero on the leaf.

It was the leaf artist’s humble tribute to the late General. Last year, when football legend Diego Maradona died in November, Mr. Rajendran had paid his unique tribute by carving Maradona’s face on a banyan leaf.

Mr. Rajendran uses the artistic genre called ‘leaf cutting art’ to pay homage to his heroes by etching their face on the leaf. If held against the sky or any light source, the face of the person he has etched will be visible on the leaf.

Mr. Rajendran has won international attention through his unique leaf painting on dried banana leaves. “I had etched the face of Maradona when the legend died on November 25 last year. He was our super-hero. And now, the General’s death is our nation’s loss,” he said, holding the banyan leaf against a bright sky.

Mr. Rajendran said that he chose the banyan leaf because the elliptical tree leaf was thick, large, glossy, and would last longer than other leaves.

He had taken four hours to carve Maradona on the leaf. But it took less than two hours for him to give life to General Rawat on the banyan leaf. He said he would preserve the work by framing it.