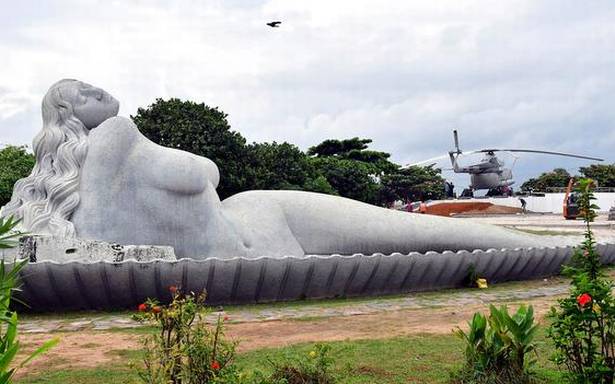 Tourism Minister Kadakampally Surendran has informed sculptor Kanayi Kunhiraman that he was prepared for talks, with the installation of a decommissioned Indian Air Force (IAF) helicopter close to the ‘Sagarakanyaka’ – the breathtaking sculpture of a reclining mermaid by Mr. Kunhiraman on Shanghumughom Beach – snowballing into a controversy.

Mr. Kunhiraman said he spoke to the Minister over phone on Sunday evening and the latter had expressed readiness for a discussion on the matter.

The tourism promotion initiative had sparked outrage and a barrage of complaints, with an influential section of the cultural world rallying behind Mr. Kunhiraman who has demanded that the immediate environment of his work be restored to its former state. The sculptor maintained he would settle for nothing short of full restoration of the ambience around ‘Sagarakanyaka.

“’The helicopter has to be shifted elsewhere. I’m also prepared to help them develop it as an art work,” Mr. Knhiraman said on Sunday.

The Mi-8, a medium twin-turbine assault chopper, perches on a massive platform to the south of the sculpture, just a stone’s throw away from it. Art lovers allege that the menacing-looking machine, rather than the elegant sculpture which had won international acclaim, dominates the scene now.

When contacted, Mr. Kadakampally Surendran indicated that the Tourism Department was not against a pragmatic solution to the controversy.

“’Let Kanayi Kunhiraman and the people who have expressed opinions about it see it and we can then do as they suggest. Several of these opinions have been aired without seeing it,”’ he said. On other hand, the Tourism Department is yet to finalise a decision regarding the complaints, Mr. Surendran said. The Indian Air Force and Kerala share a special bond after the 2018 floods and it was also the IAF’s desire to put the helicopter on display, according to him.

Both the Tourism Department and Mr. Surendran have drawn considerable flak, especially on social media, over the changes. Mr. Kunhiraman says he was not consulted on the changes. Later, when he complained to Chief Minister Pinarayi Vijayan, the latter had promised that the matter would be looked into once the local body polls were over in December.

“’Needless to say that the immediate environment of a sculpture is also part of the canvas. The landscape is integral to it. How can anyone be so insensitive? Is this tourism development? What can I say. I almost got a heart attack when I saw it,”’ Mr. Kunhiraman said.

Even the grass-covered mound opposite the sculpture on which construction is taking place now was developed by Mr. Kunhiraman as part of his work. Incidentally, it is also the location of another, smaller sculpture created by him titled ‘Vishramam.’

The ‘Sagarakanyaka’ is 105 ft long and 25 ft high and took two years to create. Mr. Kunhiraman had undertaken the work for Kerala Tourism and it was completed in 1992.

“’Back then I had consulted the local people and it took me one month to conceptualise the sculpture. The mermaid has sought refuge on land because the sea has become polluted. Much to her dismay, she finds the land also contaminated. She is beseeching the Sun to save the earth. That’s the concept,” says Mr. Kunhiraman.

Numerous artists, writers and cultural activists have come out in support of the sculptor, urging the government to rethink and shift the IAF helicopter to a more suitable location.

Keeping it near an iconic work of art would only serve to make Kerala a laughing stock before the world, according to them.

Says writer Paul Zachariah, “’This is an example of cultural insensitivity. The construction may not have been deliberately intended to harm the sculpture, but it was sheer bad decision-making without proper application of the mind. One should remember that even the landscaping around ‘Sagarakanyaka’ was done by Mr. Kunhiraman to complement the sculpture,” Mr. Zachariah said.

“Admitted that the land belongs to the government, but doesn’t a work of art deserve respect?” he said.