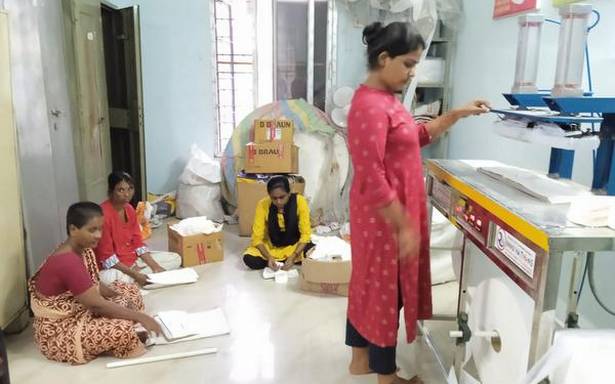 Started by five friends in 2008 who come from different professions, the non-profit Surabi Trust renders various services to the under-privileged sections of society. The women’s shelter has been running since 2013 and has the police department, Chennai Corporation, NGOs and other individuals referring destitutes to the place.

“A resident can spend between six and eight months at the shelter and during exceptional cases a year, so we play an important role to counsel and upskill them during their stay,” says D.Radhakrishnamurthy, founder-trustee.

After a preliminary examination, women are taken into the shelter. “A majority are victims of domestic violence or have been abandoned by their husbands. Our objective is to transform them to lead a new life, so apart from occupational therapy they are encouraged to pick a skill,” says Radhakrishnamurthy, a recipient of the President’s award in Scouting.

Currently, the shelter has 25 women. The training in sanitary pad making was possible thanks to a women’s club who sponsored the machine. “It’s a team work where they take up tasks like measuring, cutting, stitching and packing,” says Radhakrishnamurthy.

More than 6000 pads have been manufactured so far from the unit that is sold to members of various social clubs for their initiatives. He says that they pay the women a small stipend.

Since 2019, the Trust has been running a special shelter for patient attendees visiting the Rajiv Gandhi Government General Hospital. Contact the trust at 044 – 26181920.