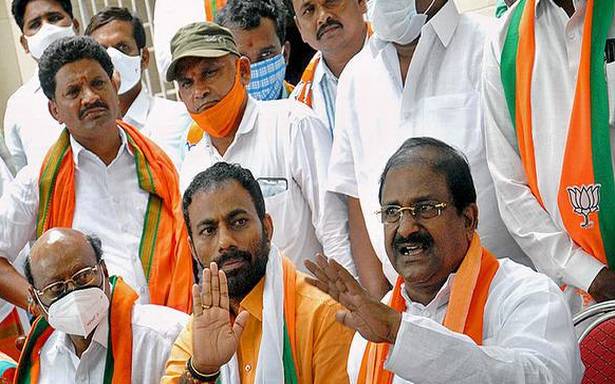 ‘Public assets are being mortgaged despite allocation of huge Central funds’

Bharatiya Janata Party State president Somu Veerraju has alleged that the defence cluster and National Investment Manufacturing Zone (NIMZ) proposed by the Centre to spur growth in Prakasam district have remained a non-starter due to the ‘lukewarm response’ from the State government.

Addressing the media here on Sunday, Mr. Veerraju said the Defence Research and Development Organisation (DRDO) Chairman G. Satheesh Reddy, whom he had met in New Delhi recently, had expressed eagerness on promoting defence manufacturing units in the district. “However, the State government has not responded positively to the grounding of the major infrastructure project at Donakonda,” he alleged.

“The previous TDP government had shown little interest in taking forward the NIMZ project mooted by the Centre near Kanigiri. So is the YSRCP government. Chief Minister Y.S. Jagan Mohan Reddy should release a white paper, detailing the benefits that would accrue to the backward district including job creation and take steps for grounding of the project,” said Mr. Veerraju.

He further accused the YSRCP government of sadding the State with more debts by mortgaging the public assets when the Centre was pumping in huge funds for development of highways, railways, ports, airports, parks and gymnasiums in urban local bodies in the State under various schemes including the Atal Mission for Rejuvenation and Urban Transformation (AMRUT).

“The Centre has sanctioned four fishing harbour berths worth ₹1,600 crore to Andhra Pradesh, but the State government has not come forward to chip in with its 40% contribution for the purpose at a time when 14 such berths had been constructed in BJP-ruled Gujarat. With no clear vision of the State government in this regard, fishermen are migrating to Gujarat, Karnataka and Tamil Nadu, which have a vibrant maritime policy, he added.