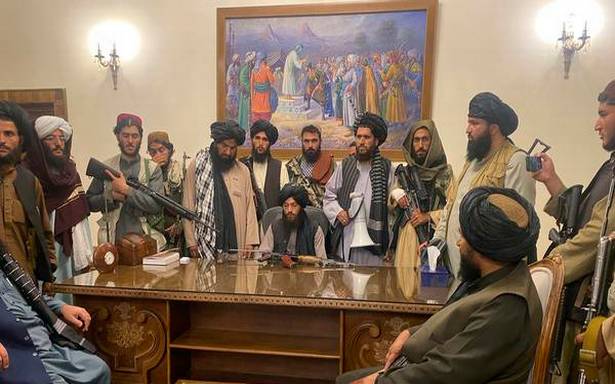 The foremost question in the minds of those thinking about Afghanistan is whether there is a Taliban 2.0. Is this avatar that stormed into Kabul on August 15 after capturing most of the country’s 34 provinces in a whirlwind campaign, any different from the barbaric entity that ruled the Afghans between 1996 and 2001. Currently, the answer to that question is up in the air since reports seem to support neither conclusion. We will perhaps truly know only if and when this dispensation consolidates its power. Meanwhile, we can consider some pointers.

The Hindu Explains | Are the Taliban on the brink of victory?

Between 1996 and 2001, when they were in power previously, the Taliban did almost nothing to improve conditions in what had by then become a devastated, impoverished country. All that the mullahs seemed to be interested in was oppressing women and minorities and providing sanctuary for jihadi terrorists from every part of the world. That crazed enterprise came to an end after the Arab guests over-played their hand, massacred civilians in the United States on September 11, 2001 and invited retaliation that drove the Talibs back to their old sanctuaries in Pakistan. Their return to power has raised the strong possibility that Afghanistan will revert to primordial mode. Apart from the memory of the consequences of 9/11, are there other factors that could inhibit the Taliban from reverting to their old ways?

The departure and after

No indication of a change in character of the movement or acceptability to the people is provided by the rapid disintegration of the previous government’s defence apparatus. The melting away of an army raised, trained, equipped and paid by the U.S. that was tasked with the mission of propping up the democratic order has occasioned much surprise. In retrospect, perhaps the only surprising element is that the event caused so much surprise.

Amidst the current bewilderment at the ease with which the Taliban advanced, it is easy to forget that much the same pattern unfolded on the first occasion. The Taliban built up their presence and hence their strength steadily from pocket to pocket before moving towards a frenzied denouement. There seems to be a characteristic of Afghan warfare that combat is carried out for so long as it is feasible and given up as soon as it is not.

Worldview with Suhasini Haidar | What does Taliban rule mean for the world?

This was an army raised to defend nebulous concepts such as nation, democracy, citizens’ rights, etc. from amongst a populace that has no experience in the operationalisation of these ideals. Traditionally, the Afghan has fought for his tribe, his clan or his family except when inspired by a few mighty war leaders down the ages. The men who joined the U.S.-created army must have done so overwhelmingly because the superpower was paying their salaries and feeding them.

Once the U.S. decided to pull out unilaterally, it must have been clear to everyone concerned that the flow of funds would stop. With U.S. President Joe Biden setting August 31 as the date of America’s final departure, the timeline was clear to all. How could anyone have expected men posted at isolated bases to hold out when they could see that the supply of ammunition, fuel and food would stop in the not too distant future?

Surprise has also been expressed at the inaction of the old warlords. Two of them, Ismail Khan and Abdul Rashid Dostum, have been in battle mode for 40 years and are well versed in the extreme viciousness of Afghan politics. A fight to the death would have been a last option, though accommodation could have been just as dangerous. For people like them, abject or complete surrender opens up the prospect of humiliation, torture, mutilation and execution. Not only for themselves personally but also for their families and adherents.

Given the scenario, Dostum and Ismail Khan would probably not have stopped their men from fighting — as they both did — unless they had been provided assurances backed by solid guarantees. In Afghanistan’s current circumstances, only regional councils of notables (Shuras) can provide such guarantees. According to reports, Taliban commanders in various sectors had asked regional notables to negotiate the surrenders of government forces. It seems reasonable to think that Shuras also offered guarantees to the hold-outs.

The very existence of these regional groupings appears to mark another difference between the Taliban’s victory in 1996 and its current success. From 1980, when the Soviets began their programme to pacify the countryside, to 2001 at least, conditions were so precarious that neutrals could do little. Many tribal elders, village heads, religious figures, etc. became collateral damage or fled abroad. There was no reason for the refugees to return either when the mujahideen factions got control of different pockets from 1992 to 1996 or even when the Taliban captured most of the country. There was too much of fighting in the first phase and too many other disincentives in the second.

The U.S. and change

With the entry of the U.S. into Afghan territory, there might have been no reduction in the physical danger (this pacification programme was just as brutal). However, economic activity and the sheer availability of funds, increased manifold. Electricity production and distribution improved significantly; highways were built up; mobile telephony was introduced and spread with its usual rapidity; and, the U.S., other governments and international agencies pumped in billions of dollars. Over 20 years, Afghans have been given enough reason to return to their farms and restart their businesses or professions. Regional elites, either the offspring of the old grandees or those who had prospered in exile, are bound to have regrouped in these circumstances.

Would such regional elites be strong enough to hold the Taliban to account? Probably not, ultimately. But would the Taliban want to resort to the ultimate in a hurry? Most of them too have been living in refugee camps or something similar for the past 40 years. Leaders of the group must be in their 60’s with families clamouring for the chance to live in peace and prosper. Those wishes can only be fulfilled if combat ends, and it will not if others too are not given their share of the cake.

If Taliban leaders are so keen on participating in the development of their country and benefiting from the process personally, would not the same consideration have come into play in 1996? Did they not instead go about stifling their own people and antagonising the whole world? One major difference is that in the earlier period, these semi-literates had no ideas for developing their country, and knew it. Today, after the laying down of modern infrastructure and the return of people who can run industry and trade, the means for building the economy are visible and available. Political power will help the mullahs live as parasites, but the economy must function for them to be able to do so.

Many analysts would say that rational thinking of this sort is alien to the Taliban. That they are religious fanatics ready to sacrifice everything on earth for a place in paradise. If they show that they are no different from what they were between 1996 and 2001, they need to be opposed on moral principle and for our national interest. However, there still seems to be time enough to find out if the pragmatic Afghan lurks behind the religious garb.