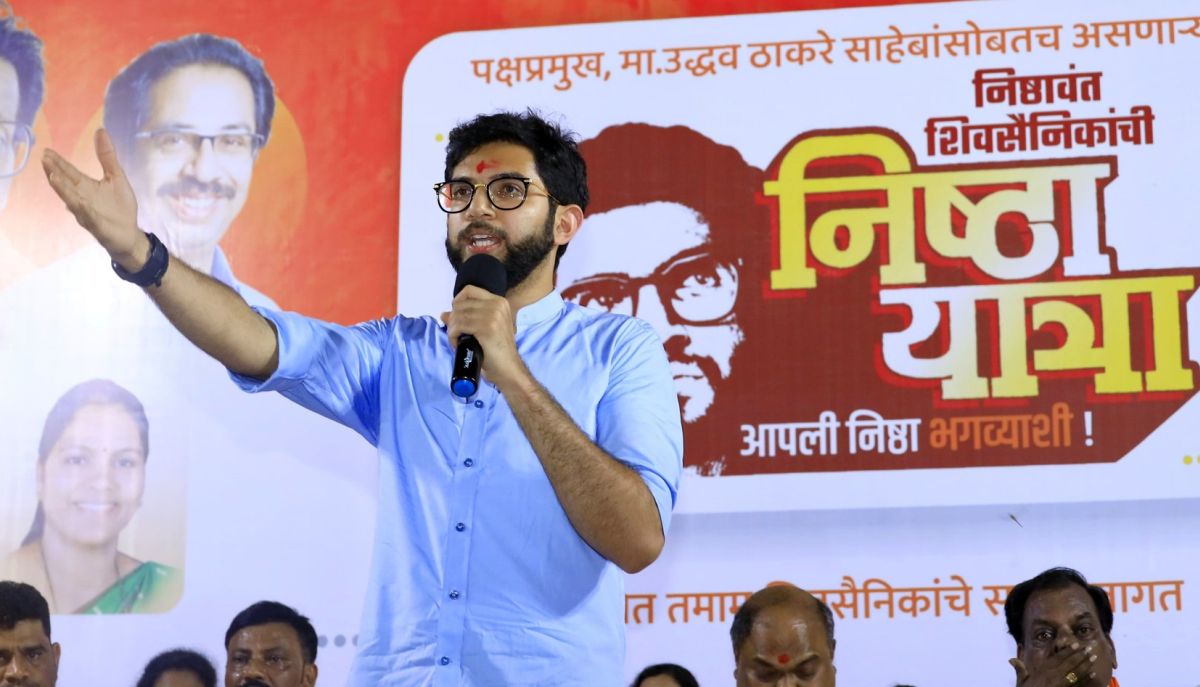 A Sena legislator felt that Aaditya hitting the road has come very late, but stressed that this is also an opportunity for him to prove himself and build his own team.

Once criticised for favouring the company of Bollywood stars and celebrities instead of Shiv Sena leaders, Aaditya Thackeray has hit the road to connect with the party’s base since the fall of the Uddhav Thackeray government in Maharashtra.

The Thackeray scion has been touring various parts of the state, especially the constituencies of rebel Sena MLAs, as the party faction led by his father Uddhav Thackeray faces an existential crisis.

Over the last one-and-half months, the tone and tenor of the usually calm 32-year-old Aaditya, who represents the Worli assembly constituency in Mumbai, has taken on aggression.

He has also been reaching out to party workers through ‘Nishtha Yatra’ and ‘Shiv Samvad’ campaigns.

As a minister, he was largely seen in trousers and shirts, sometimes sporting a crisp black jacket with formal shoes of the same colour.

Now a red tilak on the forehead is noticeable as his father faces questions over the party’s commitment to Hindutva due to its alliance with the ‘secular’ Nationalist Congress Party and the Congress.

Of the 55 Sena MLAs, 40 revolted against the party leadership in June, leading to the collapse of the Uddhav Thackeray-led Maha Vikas Aghadi government.

Of the 18 Lok Sabha MPs of the party, 12 have aligned themselves with the faction led by new Chief Minister Eknath Shinde.

Scores of former corporators and party functionaries have switched sides, prompting Aaditya to hit the road in an attempt to stem the exodus.

Uddhav Thackeray, who has been unable to travel much due to health reasons, is also meeting party workers and leaders at the Thackeray residence ‘Matoshree’.

Last year, he underwent a spine surgery while he was chief minister and operated from home for several weeks.

Many MLAs who joined Shinde in his rebellion had listed Uddhav Thackeray’s ‘inaccessibility’ as one of their grievances.

Since the rebellion broke out on June 21, Aaditya has been visiting the Sena shakhas or local party offices in and around Mumbai, trying to rally the cadres ahead of crucial municipal elections in Mumbai and other big cities in the region.

Such visits by him to local shakhas were unheard of earlier.

Beyond Mumbai, he has visited the Sena strongholds in Konkan and Marathwada and also made a trip to western Maharashtra, mostly trying to woo or reassure the demoralised cadres in the constituencies of rebel MLAs.

Aaditya has also been launching vitriolic attacks on the rebels, using a language which he seldom used in the past.

He has dubbed the rebels as gaddar or traitors, “dirt of the nallah” who “stabbed” his father in the back when he was sick.

He has also dared the rebels to resign from the assembly and face fresh elections.

The language has not gone down well with rebel MLAs.

Even some Uddhav loyalists disapprove of it.

Shahaji Patil, rebel Sena MLA from Sangola in Solapur district, said the young leader was trying to mimic his grandfather, the late Sena founder Bal Thackeray, but “duplication” does not work.

“A child like Aaditya Thackeray speaks like this, these MLAs are 50, 60 years old. Parents teach children to speak respectfully to their elders. But I don’t know whether he has been taught that,” Patil said last week.

“If he did not have the Thackeray label, it would be difficult for him to address a gathering of even 50 people. On one hand you label us traitors, on the other hand you are asking us to come back,” he added.

Notably, at his last annual Shiv Sena Dasara rally, Bal Thackeray had appealed to Sena workers to “take care of Uddhav and Aaditya”.

Sanjay Shirsat, another rebel Sena MLA, recently removed the photos of Uddhav and Aaditya from his office.

“We will not keep the photos of those who call us traitors,” he said.

Kishori Pednekar, former Mumbai mayor and one of the Sena leaders leading the charge against the rebels, said Aaditya Thackeray cannot be expected to sit on his hands when the legacy of his grandfather, which was furthered by his father Uddhav, was at stake.

“The Shiv Sena is a party with strong ties to its first family. Aaditya has seen all these people (the rebels) since he was a child. He has seen the close bond between these people and his family members. So he is naturally pained by their behaviour,” she said.

Pednekar also hinted at a larger role for Aaditya in the party.

“He could become the working president of the Shiv Sena. He has already taken on a lot of responsibility, so taking up a bigger role is just a formality,” she said.

While Uddhav was the face of the government during the COVID-19 pandemic, the policies and measures to fight the pandemic like the setting up of jumbo COVID care centres were implemented by his son, Pednekar said.

Ketan Bhosale, an associate professor of politics at Sathaye Colllge in the city, said Aaditya Thackeray’s efforts to save the party were “too little and too late”.

“He is trying to save a ship which already has several holes. The aggressive posture, which the Sena had toned down, may not work now,” he said.

A Sena legislator who did not want to be named also felt that Aaditya hitting the road has come very late, but stressed that this is also an opportunity for him to prove himself and build his own team.

“He has got everything on a platter so far. But the current crisis is an opportunity to learn and prove himself as a leader,” the Sena legislator said.