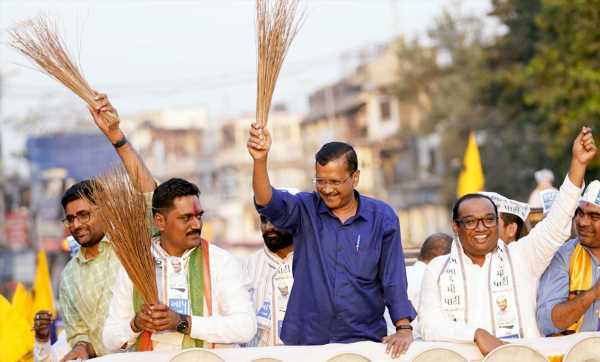 ‘Kejriwal tries to project that his party is not Hindu virodhi.’

While Aam Aadmi Party Supremo and Delhi Chief Minister Arvind Kerjiwal boasted that his party would form the government in Gujarat, when the results came it was clear that the fledgling party was far from forming a government.

In terms of vote share it did reasonably well for a debut, cornering 12.92 percent of the votes, and came at the number two slot in 35 seats. Overall, it could bag only five seats.

The Congress secured 27.3 percent of the votes and won 17 seats — one short of the 10 percent seats required to become Leader of Opposition in the 182 member Gujarat assembly.

What is worrying for AAP are reports that all five of its MLAs are set to join the Bharatiya Janata Party, a charge denied by all at the time of filing this interview.

Syed Firdaus Ashraf/Rediff.com spoke to Ashutosh, political observer, author, co-founder of satyahindi.com (external link) to find out why AAP didn’t come up to scratch in the Gujarat state elections.

What do you think was going on in Arvind Kejriwal’s mind when he decided to contest the Gujarat elections, given that his party didn’t perform as he thought it would?

AAP got 13 percent votes in Gujarat, so I will not say this was a bad performance. This is a good entry for a party which is new to Gujarat.

In Himachal Pradesh, AAP candidates lost their deposit in all seats, but one should not be surprised because AAP had abandoned the ship before the elections there.

AAP in-charge of Himachal Pradesh, Satyendra Jain, has been in jail for very long and almost the entire AAP unit went on to merge with the BJP in the state before the elections.

Therefore, I will say they have done decently in the Gujarat elections.

And after the win in the Punjab assembly elections, Kejriwal is hoping to eye other states as the Congress is weakening day by day. AAP can fill that gap.

It is said AAP successfully ate into Congress votes in Gujarat but downplayed the contest in Himachal because they did not want to fight the BJP in a state where the Muslim population was only 1 percent. How far is it true?

Not many people know that before the 2013 Delhi assembly elections, AAP wanted to contest the Himachal Pradesh elections in 2012. This at a time when AAP was not even formed.

This planning happened in front of Anna Hazare at Prashant Bhushan’s home.

In that meeting there was a discussion to contest Himachal state elections. Manish Sisodia and Sanjay Singh were sent to do a recce to check out the political situation in the state. And they submitted their report, so what I am saying is that Himachal Pradesh was on AAP’s radar from then. But for some reasons they could not contest the Himachal elections (then).

No doubt there is less Muslim population in Himachal, but if AAP had contested seriously in the state, it would have damaged the Congress’s prospects. It is because AAP’s image is anti-BJP.

In Gujarat too they cut the Congress party’s vote share.

Therefore, around 48 percent of votes even today are with the Opposition as the BJP got more than 52 percent votes in the Gujarat elections.

Had AAP not contested the Gujarat elections, the Congress would have got more than 50 seats for sure. And the BJP would not have got a record victory. So to say AAP cuts into BJP votes is not the right analysis.

Arvind Kejriwal does not believe in Kanshi Ram’s formula. He contests all elections with all his strength and wants to win.

I still say that AAP did well, because they do not have any big leadership in the state. They have not done any big andolan (agitation).

They do not have a party structure in the state. It is just that 7-8 months before the Gujarat elections they started preparing for it. And without all this support, still they got 13 percent votes, which is a good achievement.

One thing which we must not forget is that many people may like AAP, but they are not sure that this party will win elections in their state.

This perception changed in Delhi when they contested the elections for the first time and fell short of a majority and could not form the government on their own. And the second time when they contested, they won 66 seats which was a record.

The same thing happened in the Punjab assembly elections where they won a record 90-plus seats the second time after losing in 2017.

And therefore, it won’t be surprising if in 2027 AAP wins Gujarat too. Therefore, we must not underestimate AAP.

On the national scene, do you think people now see Kejriwal as an alternative?

I don’t think Indian voters look at AAP as an alternative national party.

But, yes, in state elections they have started to look at them as a serious contender and they are getting stronger in states like Delhi and Punjab.

In general elections their record is bad as they lost badly in 2014 in all seven Delhi parliamentary seats and in 2019 too. This is at a place which is the fortress of the party.

In Punjab they won four parliamentary seats in 2014, but in 2019 they won only one. And this one seat too they lost when re-election was held after the Punjab assembly elections.

AAP can be an alternative to the BJP only when they have the capacity to win 100 parliamentary seats.

Kejriwal is accused of playing soft Hindutva politics. In your past association with him, did you come across him as a communal politician?

Having said that, I must say there is no denying that there are allegations that AAP is playing soft Hindutva politics, but this allegation was framed on the Congress party during the (2017) Gujarat elections when Rahul Gandhi started visiting temples and the same allegation was against Mamata Banerjee too.

The difference between their soft Hindutva and Kejriwal’s soft Hindutva is that the BJP traps the Congress and Trinamool as a Muslim community favouring party, but Kejriwal so far has been able to escape from this trap by the BJP.

Kejriwal therefore tries to project that his party is not Hindu virodhi and in doing so they go one step ahead and give an alternative political narrative.

Therefore, when Shaheen Bagh protests were happening against the Citizenship (Amendment) Act, AAP did not utter a word.

Even during the Delhi riots of 2020, they kept quiet.

In the rehabilitation of riot victims, too, their party did a bad job.

They do not believe in standing with Muslims and when the convicts in the Bilkis Bano rape case were released, AAP did not utter a word.

This shows that the Hindutva politics of AAP is very different from the soft Hindutva that the Congress party or Mamata do.

AAP tries to project itself as a more Hindutva party than the BJP.

But, yes, one thing is very clear, AAP has never practised hate politics against the Muslim community yet. An allegation which is on the BJP and the Sangh Parivar.

How long will we be in this Hindutva-dominated election mode where no hard-hitting issues are raised, but only Hindu-Muslim talk?

Every age has its own narrative.

When India won freedom, we had the Nehruvian model of rule, after that secularism became the narrative of our country till 1990.

Slowly cracks started appearing in that and after 2014 the Hindutva narrative of politics became mainstream.

And people who say that after Modi the Hindutva narrative will change in Indian politics, they do not understand how the RSS (Rashtriya Swayamsevak Sangh) operates and their ideology too.

People must be ready as for the next 20-25 years the Hindutva narrative will run in Indian politics.

Why is the AAP not able to hold onto its party MLAs as many of them move to the BJP, and in states like Goa the entire party merges with the BJP?

The biggest reason is there is a lot of pressure on AAP leaders through law-enforcing central agencies.

Secondly, there is a lot of dilution of committed people joining AAP now. They do not have committed ideology cadres or leaders who are in AAP now. They too want to be in power and rule.

When there is a lack of commitment in party workers and leaders, then these things happen as in Uttarakhand where the entire state leadership went and joined the BJP.

This happened in Himachal Pradesh and Goa because in AAP, too, like in other parties, politicians have started joining the party. This was not the case when the party was formed where only committed ideological workers and leaders joined the party.