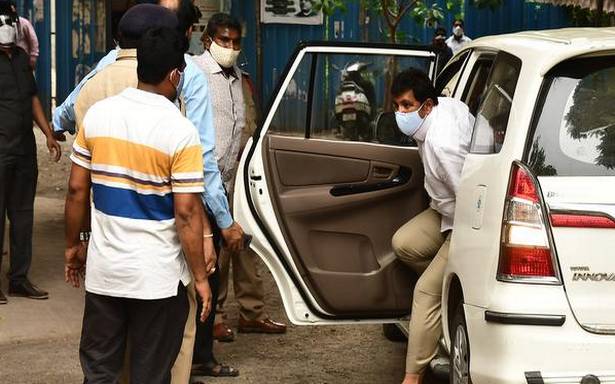 He is accused of committing financial irregularities; cases against two others too

Former TDP MLA from Ponnur and chairman of Sangam Dairy Dhulipalla Narendra Kumar was arrested on Friday by a team of the Anti-Corruption Bureau (ACB) police at his native Chintalapudi village of Ponnur mandal.

A strong posse of about 100 police personnel, who included the local police, took him into custody in early hours after serving a notice on him under Section 50 (2) of the CrPC.

“An inquiry initiated into the functioning of Sangam Dairy showed various financial and administrative irregularities under the chairmanship of Mr. Narendra in connivance with others. The allegations against Mr. Narendra are serious and the material available prima facie indicated abuse of official position, misappropriation of government assets for personal use, and various other offences,” said a press release by the ACB.

The dairy had been established as a Mutually Aided Cooperative Society in 1977 and was a success story with a string of innovations. The dairy had farmers from Guntur, Prakasam and Krishna districts as its shareholders.

In 2013, the management’s decision to bring the dairy under the Companies Act tuned controversial with many party leaders too objecting to it. However, Mr. Narendra stuck to his stand.

Soon after the YSRCP came to power in 2019, a section of ruling party had begun alleging several irregularities in the dairy. The ruling party leaders also alleged that the farmers were not being given bonus.