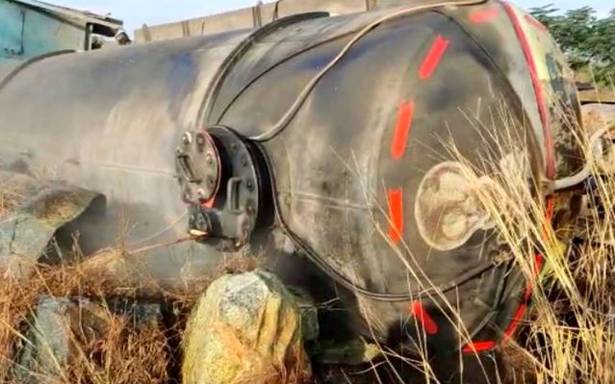 A tanker carrying Hydrochloric acid (HCL) fell on its side due to the driver’s negligence on Alur-Aspari Road in the district, about 2 km from the Alur town in the early hours of Tuesday. There were reports of acid leak after the accident.

District Fire Officer V. Sreenivasa Reddy, told The Hindu that the location was away from any human habitation and it was non-poisonous, but emanating toxic fumes within 50 meters. “We have informed the Superintendent of Police Fakkeerappa Kaginelli, who in-turn has deployed police personnel so that none goes near the tanker. Our effort is to keep public away from the site,” he added.

Meanwhile, the acid consignment being carried from some production unit either in Kurnool or elsewhere to a steel factory at Ballari in Karnataka began leaking at 3.30 a.m. The Fire Department was informed by some passerby at 4 a.m. The Adoni Additional District Fire Officer with his Alur team was on the job to contain the leak.

“We are ready with Foam Compound in case there is any fire. It is non-combustible, but water-reactive, hence, care is being taken to ensure no such thing happens and none goes nearby till an expert team reaches the spot,” Mr. Sreenivasa Reddy said.

An expert team from Kampli in Karnataka is reaching at 11.30 a.m. to safely transfer the remaining quantity into another carrier. Measures to contain the damage to human beings or nearby vegetation is underway.