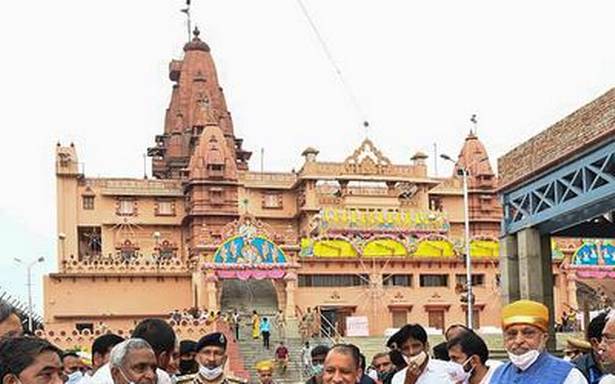 An analysis of a tourism development scheme launched in Uttar Pradesh has shown that most of the MLAs — especially those of Opposition Samajwadi Party (SP) and Bahujan Samaj Party (BSP) — have chosen Hindu religious, spiritual and cultural sites for promotion.

In the rare instances, where an MLA picked a shrine linked to Muslims or sufism, one of them belongs to the BJP, going against political expectations. Most of the Muslim MLAs of the main Opposition Samajwadi Party also preferred Hindu sites.

There were only two dargahs in the list; one dedicated to a Sufi saint Latif Shah in Chandauli which was nominated by a BJP MLA.

To put it in context, while the BJP has aggressively pushed narrative of Hindutva nationalism, in recent times even its opponents, charged with allegations of “Muslim appeasement” and alarmed by communal polarisation in elections, have tried to keep pace with what some observers have described as “soft Hindutva” while trying to maintain distance from Muslim symbolism.

While U.P. has 403 elected legislators, the State Tourism Department received proposals for development of sites in 373 constituencies. The proposals were sent as part of the Mukyamantri Paryatan Samvardhan Yojana launched by Chief Minister Yogi Adityanath earlier this year to develop and promote local heritage and tourism sites, centres of spiritual, historical, cultural, natural and religious importance.

A booklet published by the Tourism department, shows that a majority of the MLAs have picked sites associated with Hindu faith, most of them temples, dhams, ashrams, pilgrimage sites and shrines and ghats considered holy. The legislators were asked to nominate the “most important site” in their constituency to be developed into a high-level tourism site, according to officials. A sum of ₹50 lakh was allotted to each constituency while the additional funds would come from the MLA funds and CSR funds. The government earmarked a budget of ₹180 crore for the scheme.

In a recent interview with The Hindu, the Chief Minister had expressed pleasure as he noted that while the scheme was open to sites of all faiths and heritage, most of the legislators had proposed temples.

“…if a Muslim MLA has proposed a dargah, then funds would have gone even there. But because now even SP people are giving priority to mandirs instead of a dargah or a mosque, mostly temples have been proposed,” Mr. Adityanath had said.

Out of the 33 SP MLAs who proposed sites under the scheme, 29 chose Hindu temples and ashrams as well as sites dedicated to local Hindu deities, goddesses and babas. The remaining four chose a fort, a dargah, a gurdwara and a teela (mound) believed to be of the Mahabharata-era in Issopur, Shamli.

Even the SP’s Muslim MLAs preferred temples and dhams. The only exceptions being senior MLA Alam Badi of Azamgarh who picked a gurudwara and Abrar Ahmad who picked a fort in Issauli, Sultanpur.

Irfan Solanki, SP MLA from Sisamau in Kanpur said he nominated the Balkhandeshwar mandir as he felt there was no better spot in his constituency to be beautified and where families could come and spend quality time. Mr. Solanki said that the choice made by him was not under any pressure of Hindtuva politics. Pointing to his Muslim background, he also suggested it could help in creating bridges between communities.

“If a Muslim steps forward for a temple, this would also help in tackling the feelings of Hindu-Muslim (communal) that people are fuelling,” he said.

The BSP MLAs displayed a similar pattern. Out of the 16 leaders who won in 2017 on a BSP ticket, 13 picked distinct Hindu religious sites including jailed MLA from Mau, Mukhtar Ansari, whose family has been under the radar of the Yogi Adityanath government.

Former U.P. Speaker and current MLA from Didarganj in Azamgarh Sukhdeo Rajbhar, who recently announced retirement from active politics and facilitated his son’s entry into the SP after lamenting the weakening of the “Bahujan movement”, nominated a temple of Lord Shiva. The other three picked a pond, the birthplace of poet Narottam Das in Sitapur and a site linked to the Mahabharata in Prayagraj, Lakshagraha.

In comparison, the Congress list was fairly diverse. Out of the seven MLAs the party has on paper, three including State president Ajay Kumar Lallu, nominated two temples, two picked water bodies, another nominated an Ambedkar Park in Saharanpur while one MLA chose in Kanpur chose a site near a golf course in Kanpur.

Officials say the sites nominated by the legislators could indicate their electoral calculations as U.P. is close to polls. The sites nominated were those where there was already a decent footfall of locals but had scope to expand amenities, said an official.

Mukesh Meshram, principal secretary of U.P. Tourism and Culture, said many legislators had even proposed renovation of temples but the proposals were rejected as the scheme only deals with developing amenities around the site or structure of interest. “We said we cannot touch the religious structures. We will only provide the facilities [around it],” Mr. Meshram said.

The official said under the scheme the Department would provide the selected sites with seating arrangement, solar lighting, signages, toilets, drinking water, and approach roads wherever the landscape demands.