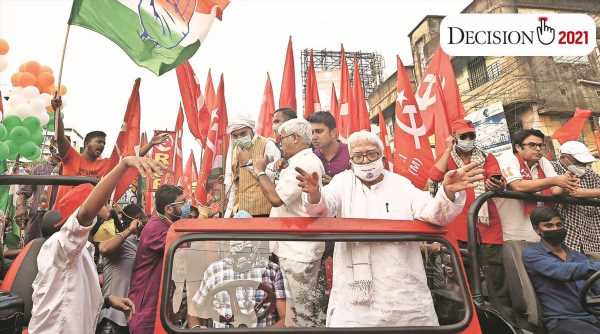 Adhir's campaigning with the Left Front leaders comes a section of Left leaders had expressed unhappiness over the state Congress chief giving Left campaign a miss. In a show of unity, West Bengal Congress president Adhir Ranjan Chowdhury on Wednesday took part in a joint campaign with Left Front chairman Biman Bose in parts of Kolkata.

He took part is a huge roadshow from Dhakuria to Jadavpur where all the four candidates of the United Front – Sujan Chakraborty from Jadavpur, Shatarup Ghosh from Kasba, Debdut Ghosh from Tollygunge and Ashutosh Chatterjee from Rashbehari – were present.

Adhir’s campaigning with the Left Front leaders comes a section of Left leaders had expressed unhappiness over the state Congress chief giving Left campaign a miss.

In the run-up to the first three phases of polling, CPI(M) leaders like Biman Bose, Suryakanta Mishra and former Tripura chief minister Manik Sarkar had campaigned for the Congress candidates. But where the CPI(M) candidates were in the fray, the top leadership of the Congress, including Adhir, gave it a miss. This had upset a section of The Left Front leaders, sources said.

According to Congress sources, Adhir has some reservation over Left Front joining hands with Abbas Siddiqui’s ISF. After the seat-sharing arrangement, Adhir camped in Murshidabad for Congress candidates.

Meanwhile, the Left and Congress leaders have started saying that TMC has weakened and may not get a majority on its own in the Assembly elections. “After the third phase, we are stressing that we are the only option to defeat the BJP,” a senior CPI(M) leader said.