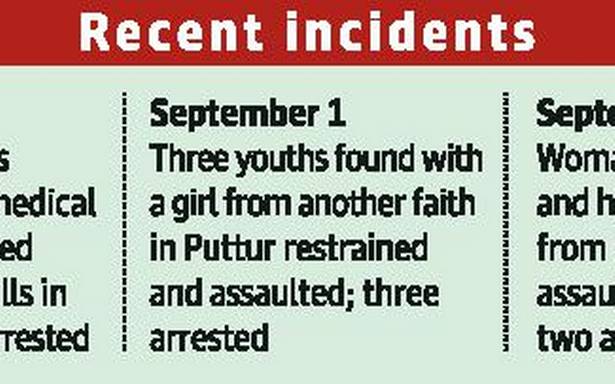 It’s an effort to pressure govt. to bring laws to prevent love jihad, argue some

After over four months, vigilante groups appear to have become active again in Dakshina Kannada, waylaying and attacking inter-religious couples or heterogeneous groups of friends.

Of at least four such incidents which came to light in the district during August-September, police cases were filed in three incidents – two of which took place in Puttur and another from Karinjeshwara, near B.C. Road. No complaint or case was filed in another incident which reportedly happened near Sullia.

According to sources, while Hindutva outfits were behind three incidents, there was involvement of Islamist activists in one incident in Puttur. There had been a lull in such attacks since April.

Social activists and some police officials attribute them to the renewed effort by Hindutva groups to press on the government to bring laws to prevent “love jihad” and conversion. It appears to be also an attempt to polarise society before the next elections to the taluk and zilla panchayats and the State Assembly.

Social activist Suresh Bhat Bakrabail, who has been recording vigilante attack incidents, told The Hindu that it appears to be a continued effort by the right-wing groups to force the government to frame Uttar Pradesh-like laws. Democratic Youth Federation of India State president Muneer Katipalla said they are part of politics to polarise people. “With impending elections to the taluk and zilla panchayats and the Assembly, one can expect more such incidents,” he said.

Another activist Vidya Dinker said the police and the district administration are “soft on the accused” and no effective action is being taken against persons involved in the attacks and political leaders are harbouring such persons.

Ms. Dinker said that the guidelines issued by the Supreme Court in 2018 against vigilante attacks mentioned that police should book such accused under Section 153 (A) (promoting enmity between different groups) of Indian Penal Code, which is often not followed.

Absence of effective action by the authorities continues to dent the image of Dakshina Kannada, she added.

As an exception in the recent times, Mangaluru city’s Kankanady police had invoked 153 (A) against Bajrang Dal activists for stabbing a 23-year-old boy who was travelling in a bus with his friend from a different religion. The police had also booked them under Section 307 of IPC (attempt to murder). Five years ago, vigilante attacks had come under control after the police filed attempt to murder cases against attackers in some cases.

A police officer, who has been serving in coastal region for the last few years, admitted there was political pressure to invoke lenient penal provisions against the accused persons, which makes it easy to get bail.