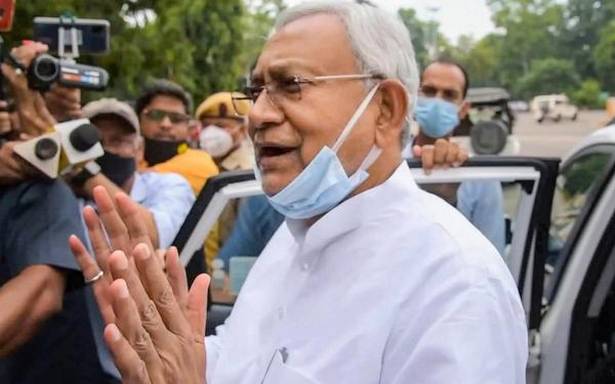 Ahead of Bihar Chief Minister Nitish Kumar-led all-party meeting with Prime Minister Narendra Modi on Monday over the demand for a caste-based census in the country, senior State Bharatiya Janata Party (BJP) leader and party Rajya Sabha member Sushil Modi tweeted to say that the “BJP was never against caste-based census”.

BJP MLA and Minister Janak Ram will represent his party in the 11-member team which is scheduled to meet Mr. Modi at 11 a.m. All members of the delegation have reached New Delhi for the meet.

“BJP was never against caste based census. We’ve also been part of resolutions passed in the State legislative Assembly and Council in its support. The delegation that will meet PM Modi also includes a BJP representative”, Mr. Sushil Modi tweeted on Sunday.

Earlier before leaving for Delhi on Sunday evening, Mr. Kumar said that there must be caste-based census in the country “at least once”.

“We’ve been seeking this since long. It is a crucial issue. If it works out, nothing could be better than that. It will not be only for Bihar but people of the whole country would be benefited from this. It should be done at least once”.

“It is the desire of the people that there must be a caste-based census in the country. I hope there will be positive discussion on this [with the PM]. If the caste census is not conducted by the Centre, then it will be considered by the government in Bihar,” Mr. Kumar added.

Mr. Sushil Modi said in a series of tweets: “Only 22 castes are counted at a time when population of Bihar was only 1 crore. After 90 years there are big differences now — economic, social, geographical and political. There are technical and practical difficulties in a caste-based census but still, the BJP supports it in principle,”

In another tweet, he recalled that in 2011, the BJP’s Gopinath Munde had also spoken in Parliament in favour of a caste-based count.

Since long, Mr. Sushil Modi has been considered close to Mr. Kumar and has been Deputy Chief Minister for a long time.

However, a few days back, Deputy Chief Minister Renu Devi had said that the BJP would not accept caste-based census as “its policy decision”.

On July 20 this year, Minister of State for Home Affairs and senior State BJP leader Nityanand Rai in a written reply to a question in Parliament had said that “the government of India has decided as a matter of policy not to enumerate caste-wise populations other than Scheduled Castes and Scheduled Tribes in the census”.

The last caste-based census in the country was conducted in 1931 under the British rule.