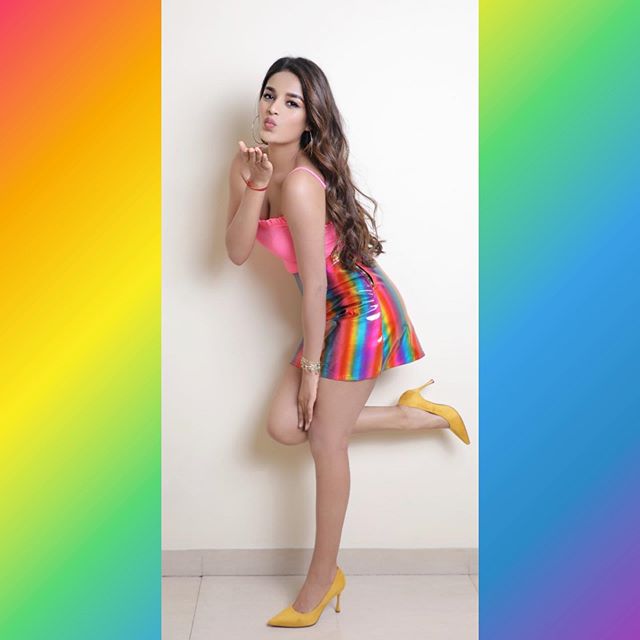 Nidhhi Agerwal is well known face for Telugu audiences. The actress made her Telugu debut with Akkineni Naga Chaitanya starrer Savyasachi, which was bombed at the box office and later she teamed up with Akkineni Akhil for romantic entertainer Mr Majnu, unfortunately this movie was also ended up commercially flop. But Akkineni girl Nidhhi Agerwal is still trying for that one opportunity which could make her reach more audiences. Recently Nidhhi Agerwal came up with a colourful pic, in which she is seen throwing flying kiss to her fans.

She captioned the pic, “I’ve been wanting to give you’ll a big kiss for a while now, glad I could do it with this picture.” Coming on the pic, Nidhhi Agerwal is seen wearing a colourful skirt and throwing flying kiss to her fans.

On the work-side, currently Nidhhi Agerwal is busy in her upcoming action and romantic entertainer iSmart Shankar, directed by Puri Jagannadh and bankrolled by jointly Puri and Charmee Kaur. The film has Ram Pothineni is lead role. Apart from Nidhhi Agerwal, the film also has Nabha Natesh in female lead.

Nidhhi Agerwal started her filmy carrer with Bollywood movie Munna Michale, which was released in 2017. She was Yamaha Fascino Miss Diva 2014 finalist. She will also be seen in upcoming Hindi movie Mask, which is in pre production stage.