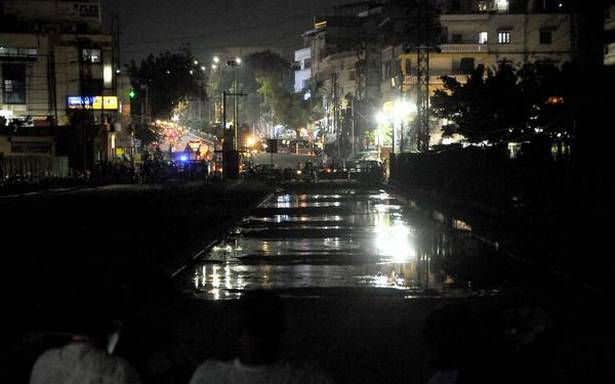 More gates of twin reservoirs lifted to let out inflows

A large quantity of surplus water arriving into the twin reservoirs is being let downstream into River Musi following heavy downpour in the catchment areas. Six flood gates of the Osmansagar reservoir and 10 gates of Himayatsagar have been lifted to let out 2,100 cusecs and 7,700 cusecs of water, respectively.

While four gates of the Osmansagar had already been lifted by two feet on Monday night, they were further lifted to three feet on Tuesday morning, apart from two more gates being lifted to the same height.

With regard to Himayatsagar, only two gates were lifted by one foot on Monday night. On Tuesday, eight more gates were lifted phase-wise, all by two feet, and the height of the earlier two gates was increased to three feet, in order to cope with the 5,000 cusecs of inflows.

Hyderabad Metropolitan Water Supply & Sewerage Board has alerted the Revenue administrations of Hyderabad and Rangareddy districts, GHMC and Police about the possibility of floods in Musi river, so that residents of the surrounding areas could be shifted to safer locations.

The road leading to the causeway on Musi river in Amberpet was barricaded near Musarambagh crossroads, as a precautionary measure.

Contrary to forecast, the city experienced a relatively dry Tuesday. A few areas such as Madhapur, Cherlapally, Kapra, Borabanda and Srinagar Colony recorded rainfall between 2-2.5 mm.

The GHMC, through a press statement, informed that about 200 families in the low-lying areas of Mehdipatnam have been supplied food from Annapurna canteens, and 60 families in Musarambagh have been shifted to rehabilitation centres with food and drinking water provisions. GHMC control room received 448 complaints on Monday and Tuesday, of which 37 were made on Tuesday, the statement said. Majority of the complaints were about water stagnation and tree falls, it said.