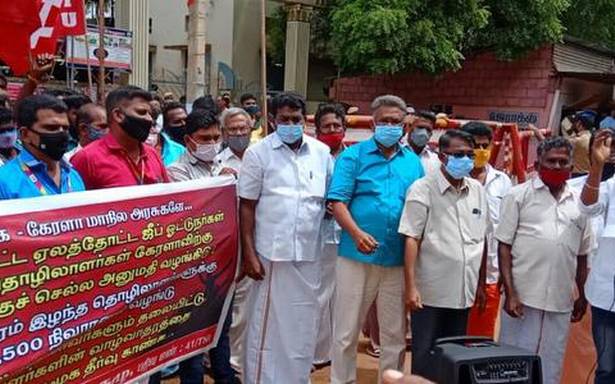 Demanding the Tamil Nadu and Kerala governments to help them permit to enter Idukki district, a large number of SUV drivers and workers employed in cardamom estates staged a demonstration in front of the office of Tahsildar at Uthamapalayam in Theni district on Tuesday.

Following the COVID-19 pandemic induced lockdown, they were rendered jobless for four months. Now that the restrictions have been eased, they were expecting to return to work, when the pandemic appeared to have declined and when workers were preparing to go to work, but they were not permitted to enter Idukki district by the Kerala government, they said.

Every day, about 10,000 to 13,000 workers from Cumbum, Uthamapalayam, Chinnamanur, Thevaram, Bodi and Gudalur travelled in SUVs to estates in Idukki district and returned home in the evening. The Kerala officials in the border insist that they must show proof that they had taken the two doses of vaccine for COVID-19 before entering Idukki district. Sometimes, they also ask them to produce certificate that they tested negative for the virus. This is unrealistic to do so on a daily basis, they said.

The drivers said that the government should direct the district administration to arrange for vaccine doses (first or second) for the drivers through special camps. They also demanded financial relief of ₹7,500 each “as the lockdown had pushed many of them to borrow from moneylenders.”

Idukki district officials have conveyed to their Theni counterparts that since the number of fresh COVID-19 cases was on the rise in Kerala, they were cautious. However, those who had been inoculated were permitted but on the assurance that they would maintain the precautionary norms such as wearing of face mask, using hand sanitiser and maintaining physical distancing.

The Theni officials said they had also intensified the surveillance at check posts in view of high number of cases in Kerala in the last one week.