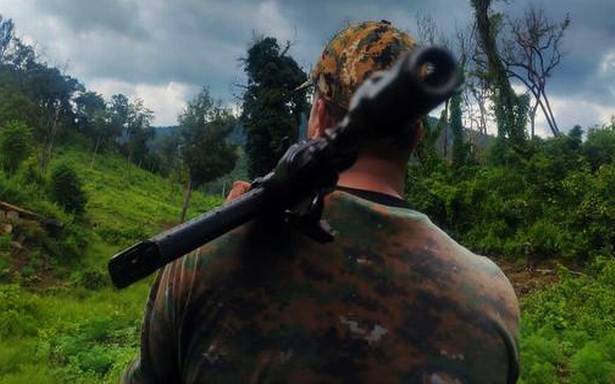 This monsoon, the centenary of the ‘chilli post’ war strategy executed against the British by freedom fighter Alluri Sitaramaraju was celebrated.

The famed ‘Mirapakai Tapa’ or chilli post involved delivering a post tied to a bunch of chillis by shooting an arrow into an enemy camp. In 1922, Alluri’s strategy shot to fame with the dispatch of a chilli post to the British during the attack on the Chintapalli police station in the Visakhapatnam Agency, adjoining the Godavari Agency. A century later, the chilli scare comes back, in a different way though, to the Agency where the Rampa rebellion (1922-24) thrived during the freedom struggle.

Last week, a police team led by SP M. Raveendranath Babu ventured into the Naxal-hit hill areas on the banks of the Sileru river braving heavy rainfall and were shocked by what they saw in the fields there — it was chilli being grown as an intercrop in a ganja field near Odiya camp (village name) in the Chintoor Agency.

Along with local tribal people they destroyed the ganja plants in the 10-acre farm expected to yield more than 6,000 kg of the narcotic. “The value of the ganja burnt in the single drive is ₹6 crore. We did not touch the chilli plants in the field,” says Mr. Ravindranath Babu.

“The raid in the Andhra-Odisha border area has given us more clues on the ganja trade cycle. We need the support of the tribal people to tackle the trade,” he explains.

Until now, chilli is regarded as a commercial crop in the East Godavari Agency. Now, the crop comes under scrutiny as gangs from across the country have tapped its potential to be a safe cover for ganja cultivation.

“We did not have any clue about ganja being grown in chilli fields. We only knew that it is being grown in encroached forest covers. A coordinated effort will be needed now to curb the activity in these areas,” says Chintoor Division Forest Officer V. Saibaba, who participated in the raid.