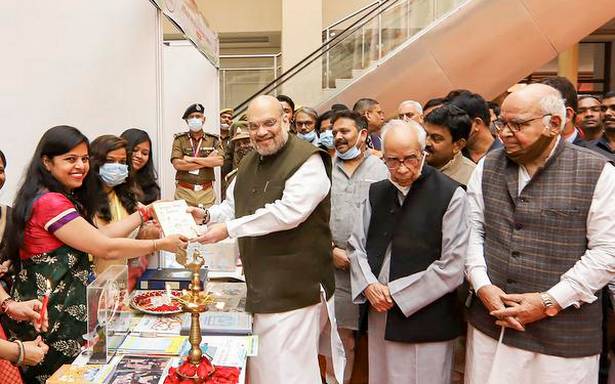 Raising the Hindutva pitch in poll-bound Uttar Pradesh, Union Home Minister Amit Shah on Saturday offered voters the choice between two sets of what he abbreviated as JAMs — the BJP’s Jan Dhan Yojana, Aadhaar card and mobile phones for everyone as against Muhammad Ali Jinnah, Mohammad Azam Khan and Mukhtar Ansari of the Opposition.

Addressing a rally after laying the foundation stone of a State university in Azamgarh, considered an SP stronghold, Mr. Shah took a swipe at Samajwadi Party president Akhilesh Yadav for his recent reference to Jinnah at a rally in Hardoi. While the BJP’s JAM stood for Jan Dhan bank account, Aadhaar and mobile phones, the SP version consisted of Jinnah, Azam and Mukhtar, Mr. Shah said.

Mr. Khan is a Lok Sabha member from Rampur in western U.P. and a senior Samajwadi Party leader while Mr. Ansari is a BSP MLA from Mau in Purvanchal adjoining Azamgarh and is designated a ‘mafia’ criminal by the BJP government. Both Muslim leaders are currently in jail.

“Now you tell me do you want BJP’s JAM or SP’s JAM,” Mr. Shah asked in Azamgarh, which he said was known for “fundamentalist thinking” and for being a “safe haven for terrorism” under the SP rule.

Mr. Shah accused Mr. Yadav of glorifying Jinnah as the election season came near. “Is there anyone here who sees a great person in Jinnah? But Akhileshji feels so because the election season is here,” said the BJP leader. Mr. Shah said that prior to 2017, rule of casteism, ‘dynasticism’ and appeasement existed in U.P. “Everyone did not get justice,” he said, adding that now Chief Minister Yogi Adityanath had brought an end to these.

The Union Home Minister suggested to Mr. Adityanath, who was also on stage, that the new university be named after Maharaja Suheldev, a medieval-era mythical warrior-king who is today revered by both Pasis (Dalits) and Rajbhars (OBC). Though Suheldev’s historicity is shrouded in mystery, over the years the BJP and RSS have aggressively projected him as an ideal Hindutva warrior who halted the march of Muslim invader Ghazi Mian, a nephew of Mahmud Ghaznavi.

Mr. Shah referred to this and said Suheldev had driven back “foreign invaders” from the land of U.P. and fought against “terrorism” back in his age. “If this university is named after him, it would be a big message for people,” he said.

Mr. Shah’s speech was high on Hindutva rhetoric, where on the one hand he accused the Opposition of dividing people along caste lines, causing riots, indulging in appeasement and vote bank politics, on the other he said the BJP had fulfilled the promise of a Ram Mandir in Ayodhya and diluting Article 370 in Jammu and Kashmir, apart from making U.P. free from all mafia.

He lauded Mr. Adityanath for making Purvanchal “machhar and mafia mukt,” a reference to the Chief Minister’s law-and-order policy and handling of encephalitis outbreaks in the region.

Mr. Shah told voters in U.P. that their blessings would help Prime Minister Narendra Modi to move forward and strengthen his resolve in making India a big global force and get the due respect for the country.

Mr. Akhilesh Yadav is the MP from Azamgarh. In 2017, going against the trend, the BJP had managed to win only one seat in the district, while the SP clinched five and the BSP had four.