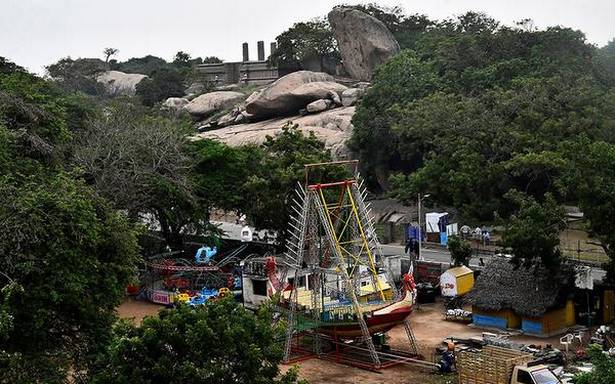 A temporary amusement park that has come up near Arjuna’s Penance, a historic monument at Mamallapuram, has become a cause of concern among archaeology and heritage enthusiasts.

Though the temporary set-up was located on the other side of the road adjacent to the monument, the amusement park, with multiple rides aimed at attracting tourists, was situated only a few metres away from Arjuna’s Penance in the historic coastal town.

“This is our heritage. We are lucky to have it in this part of the country where the whole world can see and realise our heritage. It is disappointing to see such recreational activities so close to the monument and at the cost of its safety,” said a frequent visitor to Mamallapuram and an archaeology enthusiast, on condition of anonymity.

He also said Section 20(A) of the Ancient Monuments and Archaeological Sites and Remains Act, 1958, prohibits the carrying out of public works or other activities in prohibited areas, which extends to a distance of 100 m from such monuments.

However, the Superintending Archaeologist at ASI, P.S. Sriraman, said there was no threat to the monument.

“The monument has been carved from one of the hardest materials on earth. The vibrations will not do anything to the monument, which is far away.”

But he said those running the temporary amusement park had not taken permission from the authorities and had not undertaken any safety measures.

“They [the operators] have not taken any permission… We have already informed the local body authorities that it should be removed from there. They cannot make it permanent.”

“Although it is private land and they have every right to do whatever they want, it is not good for the area,” he added.