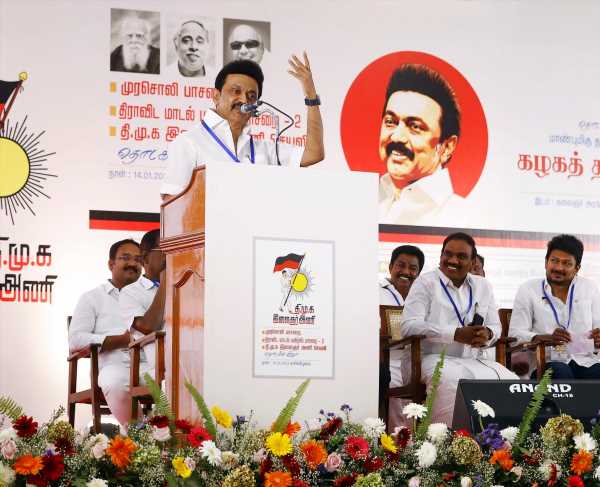 Neither the ruling DMK nor the fractured AIADMK Opposition anticipated that an assembly by-election would so put them both to test, observes N Sathiya Moorthy. 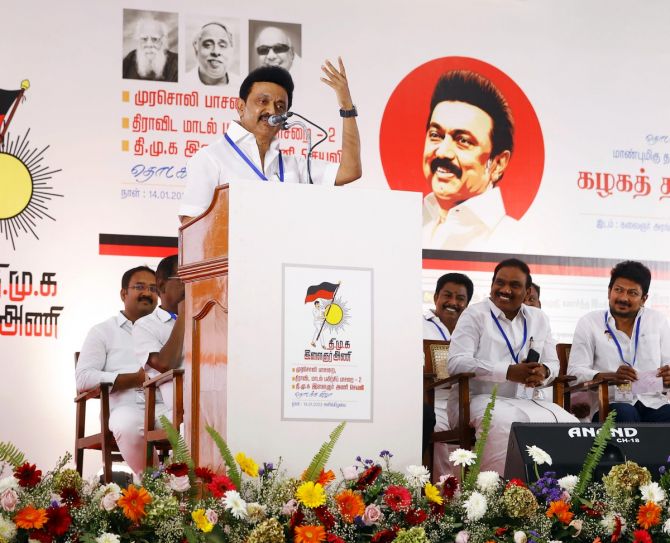 In Tamil Nadu, where neither the ruling DMK, nor the fractured AIADMK Opposition had anticipated it, an assembly by-election, forced by the death of a Congress MLA, has put them both to test, when both were expecting a showdown only in the Lok Sabha polls, more than a year away, in May 2024.

The February 27 by-election has been caused by the sudden death of Congress MLA E Thirumahan Eeveraa, 46, following a cardiac arrest on January 4.

Even more, no political party or leader was prepared for a fast-tracked by-poll within weeks of the unexpected death, as the Election Commission combined it with the assembly elections in Tripura, Meghalaya and Nagaland, all of which have fallen due.

Their expectation was that the Erode East by-poll would be scheduled along with the assembly polls in neighbouring Karnataka, a few more weeks down the line. It was not to be.

After his death, his father and former Union minister E V K S Elangovan indicated that he was not keen to contest and would seek the seat for his second son Sanjay Sampath, arguing that he wanted youngsters to be given a chance. Elangovan pledged to work for whichever candidate the party fielded.

Even before DMK cadres had begun claiming the seat for the party, party chief and Tamil Nadu Chief Minister M K Stalin promptly conveyed that the DMK would support the continuing Congress ally from the 2019-2021 elections, to field its candidate and the DMK leadership and cadres alike would fight the polls as if it was theirs.

The Congress has since named Elangovan as its candidate. A minister of state in then prime minister Dr Manmohan Singh’s government, Elangovan, at 76, is also a former state party president.

In the 2019 parliamentary polls, Elangovan was the only DMK front candidate, of a total 39, to have lost his seat.

Having migrated to the unfamiliar Theni Lok Sabha constituency, that too at the last minute, he lost to AIADMK’s P Raveendranath Kumar, the son of that party’s coordinator and three-time chief minister, O Panneerselvam.

The Congress choice of Elangovan for the seat even after he publicly displayed his uninterest flows from his seniority, as the party cannot afford to lose, nor can it afford to let down the DMK leader of the alliance, for whom the by-election is an unsought-after referendum on Stalin’s 20-month rule, that too one year ahead of the Lok Sabha polls.

The Congress leadership also seemed to have concluded that it wanted a sharp and senior leader in the state assembly, where the eight-member group used to be led by K Selvaperunthagai, chairman of the state party’s scheduled caste cell. In favour of the Congress candidate, even before Elangovan’s name was announced, the DMK had sent out two senior ministers K N Nehru and S Muthuswamy, the latter a victor of electoral battles when he was in the rival AIADMK until Jayalalithaa’s first term as chief minister (1991-1996).

The DMK has since drawn out a list of ministers and other senior leaders, including Electricity and Excise Minister V Senthil Balaji, in charge of the campaign, with Nehru, the senior-most among them, but from distant Tiruchi leading the team, even if not formally designated thus, if only to avoid controversies of any kind.

The reasons are not far to seek. Muthuswamy is a local and a veteran whereas Sethil Balaji, who was also a former AIADMK minister under Jayalalithaa, has been put informally in charge of the traditionally-weak-for-the-DMK western region of which Erode district is a part.

Obviously, Stalin did not want an ego clash between the two to come in the way of a Congress victory.

Then, there is the continuing spat between Balaji and state BJP chief Kuppusamy Annamalai.

It began with Annamalai charging the minister with corruption in an electricity contract in March last year, and Balaji retorting in kind, rather belatedly.

The ‘Rafale wrist-watch’ controversy and the more recent incident involving BJP youth wing President and Bengaluru MP Tejasvi Surya ‘inadvertently’ opening the emergency exit on a Chennai-Tiruchi flight were revealed by Balaji, through separate tweets, weeks away from each other.

Incidentally, Annamalai was Surya’s co-passenger, sitting next to him on that flight.

Surely, the DMK leadership does not want the Erode East campaign reduced to a war-of-words between Annamalai and Senthil Balaji, and nothing more. If as a mid-term referendum the by-election is a prestige fight for the ruling DMK, it is a life-and-death battle for leaders of the rival factions of the AIADMK Opposition, which is divided into four unequal parts.

For reasons that are not wholly comprehensible, AIADMK faction leader and former chief minister Edappadi K Palaniswami rushed for the party to fight the Erode East though under the 2021 poll formula, it had been allotted to the Tamil Maanila Congress, a breakaway group of the Congress under former Union minister G K Vasan.

EPS met Vasan to seek and obtain the seat for the party, but then, his rival factionist OPS too wanted the seat from Vasan.

Maybe because Vasan told him that he had given his commitment to the first bidder between the two, OPS has announced his decision for his faction to contest the by-poll.

Then, there are two other factions, under the late AIADMK chief minister Jayalalithaa’s one-time confidante Sasikala Natarajan and the latter’s estranged nephew T T V Dhinakaran. Of the two, the latter has decided to field a candidate.

EPS has been claiming ownership of the party as the self-styled ‘acting’ general secretary after the Supreme Court refused to stay the Madras high court order, approving the decision of the party general council, from where the rival OPS faction walked out in a huff, after being booed.

He has also cited a communication from the Election Commission to claim that his was the acknowledged real party.

Unsure of the BJP’s commitment at the time — it came later, if addressed to his faction — EPS at one stage declared that he ‘will chart a separate course to realising MGR and Jayalalithaa’s dreams’.

He was implying that the AIADMK was ready to break away from its national ally, if it came to that.

Against this, OPS — who has much fewer MLAs, the party’s sole Lok Sabha member, and a reported low cadre-following — contests that the leadership issue remains unsettled until the Supreme Court disposes of his appeal.

Then, there is Sasikala, who does not talk about legal matters, but whose petition claiming to the be party’s ‘duly elected’ general secretary after Jayalalithaa’s death, too, is pending before the Supreme Court.

At the centre of the EPS-OPS feud is the right to use the party title and flag exclusively and the right to retain the ‘Two Leaves’ election symbol.

If OPS has said he would field a candidate, so has EPS said, since, stating clearly that they were ready to contest Erode East even without the ‘Two Leaves’ symbol, implying that it was only an interim problem and his faction would be duly recognised as the ‘real’ AIADMK.

Yet, the EPS faction spokesmen are equally confident that they would be allotted the ‘Two Leaves’.

In the absence of a clear-cut Supreme Court ruling in pending cases, it is the Returning Officer, an employee of the state government, who decides.

Courts and even the EC higher-ups cannot reverse it in normal course. That leaves the BJP, whose cadres seemed too keen for the party to contest, especially pending the faction feud in the AIADMK ally.

Since the assembly polls in May 2021 and the urban local bodies elections later that year, some state BJP leaders and the EPS faction have been taking an occasional swipe at each other.

Some in the EPS camp even saw the by-election as a test for BJP’s ‘loyalty’ as an ally, going beyond the obvious — and wanted to evaluate the other’s sincerity over they obtaining the ‘Two Leaves’ symbol.

Rather, the EPS faction leaders wanted to decide it here and now, without waiting for the Lok Sabha polls, when it might become difficult for them to market a new symbol, and even party name and flag, if it came to that.

Unlike the EPS faction, the OPS group left a line open on the BJP side, declaring that they would back the national ally if the latter decided to contest.

However, state BJP president Annamalai has put all such speculation to rest, declaring that it was for the AIADMK to decide/contest.

‘The AIADMK is the biggest party in the NDA alliance,’ Annamalai told newsmen.

‘Many AIADMK candidates have won in Erode before. There are many AIADMK ex-ministers in Erode,’ he said adding that a by-election ‘is not a time when parties show their strength. Hence, we should follow the alliance dharma.’

Indications are that the BJP’s national leadership had taken stock of the situation and decided against the party contesting the by-election, especially after the rival Congress decided to field a senior leader in Elangovan, and early on.

If contesting the by-election was an opportunity to evaluate the BJP’s self-assessed strength in the Dravidian state, the party’s candidate losing the fight to a Congress rival was something that the national leadership could not stomach, that too in a year when a series of assembly elections are due — to be followed by the Lok Sabha elections next year.

The belief is that the BJP is referring only to the EPS faction, and not the OPS group.

It also implies that the OPS faction would contest the by-election alone, so would the TTV group.

Should the EPS faction lose, and the other two poll substantial votes, then the pressure would be on EPS to unite. Or, that is what the other two are looking for, unless under pressure, they now decide not to contest.