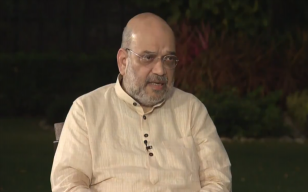 Home Minister Amit Shah told Sansad TV in an interview aired on Sunday that an illiterate person becomes a burden on the country and that among the achievements of Prime Minister Narendra Modi in his tenure as Gujarat Chief Minister was 100% primary school enrolment.

Mr. Shah spoke to the government channel last week, marking 20 years of Mr. Modi in public office — first as Gujarat Chief Minister and then as Prime Minister from 2014.

When asked about allegations of Mr. Modi taking unilateral decisions and being dictatorial, Mr. Shah said these were baseless allegations. Mr. Shah, who has worked with Mr. Modi in the BJP, the Gujarat government and now in the Central government, said he had never come across a better listener than Mr. Modi. He said the Prime Minister heard out all points of views and held extensive discussions before taking decisions. He said unlike before, the details of decisions taken do not leak out, leading to some people thinking the decisions are taken unilaterally.

Speaking about the challenges faced by Mr. Modi as Chief Minister, the Home Minister said the school enrolment numbers and drop-out rate was a problem in India and Gujarat. He said Mr. Modi took up enrolment drives as a mahotsav or festival. Enrolment increased from 67% to 100% and the drop-outs decreased from 37% to under 1%, he said.

“You can understand what contribution this had on the development of the country and Gujarat. An illiterate person becomes a big burden on the country. Neither does he know his Constitutional rights, nor the duties asked of us by the Constitution. How can he be a good citizen,” Mr. Shah asked.

He said Mr. Modi had quickly taken to the world of administration, having had no experience. “Never been a sarpanch, let alone an MLA,” he said.

Mr. Shah said Mr. Modi focused on upliftment of the tribal population of Gujarat that the Congress had “used as a vote-bank” earlier. Mr. Modi also worked to develop the coastal areas of Gujarat, which became the “backbone of Gujarat’s industrial development”, he said.

He said Mr. Modi became Prime Minister at a time the country was down in every sector, there were “scams of ₹12 lakh crore” and “policy paralysis”. He said Mr. Modi took risks in decisions as he believed that he was in government to change the country. Mr. Modi’s primary goal was “India first”, he said.

“Only he could have implemented a decision like demonetisation,” Mr. Shah said.

Responding to a question about criticism of Mr. Modi over the years, Mr. Shah said, “With every criticism, Modiji becomes stronger”. He said the public was standing with Mr. Modi through tough decisions. He said allegations including of corruption and “communal riots” have never stuck as Mr. Modi has worked with transparency.