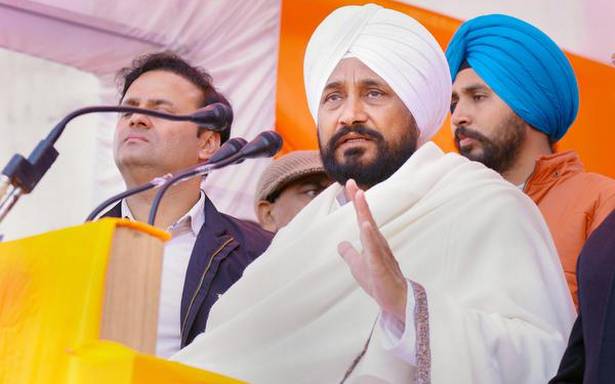 Punjab is the State with the highest percentage of Scheduled Caste population in India at nearly 32%, yet the community has not seen the emergence of strong leaders across key political parties. Sharp caste divisions within the SCs, landlessness, and indifference in political parties are among the key deterrents to their rise.

Ahead of the 2022 Assembly election, the Congress party’s electoral strike in appointing an SC Chief Minister with Chanranjit Singh Channi brought the community back into focus in Punjab’s political arena.

Punjab’s Scheduled Castes, like their counterparts in other parts of the country, are not a homogeneous community. They are scattered into 39 castes and five major religions, and include Hindus, Sikhs, Christians, Muslims and Buddhists, besides followers of a large number of sects and faiths such as Ravidassias, Ramdassias, Kavirpanthis and Radhasoamis.

Underlining the sharp caste-religious divide within the community, Ronki Ram, Shaheed Bhaghat Singh Chair Professor of Political Science at Panjab University, said, “Among their 39 castes, two caste groups constitute about 80% of the total SC population (31.91%, 2011 census). The two caste groups comprise four castes — Valmikis and Mazhabis, Chamars and Ad-Dharmis. Each of these two main caste groups consists of 40% population of the total SC population of Punjab. Politically too, they are equally divided along the ideological lines of the main political parties in the State. Their political divide is vividly exhibited in the bifurcation of SC reservation of 25% into 12.5% for Valmiki and Mazhabi castes and the remaining 12.5% for the rest of the 37 SC castes. The caste and religious divisions within the SCs of Punjab over the years preclude them from developing their own distinct and effective State-level leadership. Finding it difficult to cultivate exclusively SC-based leadership at the State level, different caste-based SC factions align with different political parties within Punjab to get elected on 34 reserved Assembly seats.”

There are a total of 117 Assembly constituencies in Punjab.

Moreover, SCs stand nowhere near Jat Sikhs in the latter’s dominance of farmland ownership. The majority of SCs in the State are agricultural workers employed by Jat Sikhs, the economically stronger community that has dominated politics, whether in the Congress or the Shiromani Akali Dal.

Ashutosh Kumar, Professor of Political Science at Panjab University, explains: “Punjab is an agrarian economy and SCs hardly own land in Punjab. This is the key reason that we haven’t seen a strong Dalit leader emerging in the State. In Punjab, Jat Sikhs have dominance as far as the ownership of agricultural land is concerned. The SCs, on the other hand, have lesser land holdings. In fact, a large number of SCs are engaged as workers on the farmlands of Jat Sikhs. The religious and caste divides among SCs is another reason.”

It was the Bahujan Samaj Party that featured Dalits as a political plank in the State for the first time in 1992, when it secured over 16% votes and won nine seats, but since then, the party has seen its support declining down to around 1.5% votes in the 2017 Assembly polls.

Political observers feel the indifferent attitude of political parties towards SCs is another key reason for the non-emergence of strong SC leadership in Punjab’s politics. Des Raj Kali, a well-known Punjabi novelist and political analyst, whose work focuses on the Ghadar movement, SC issues, and the State’s literature and culture, points out that political parties, whether the Congress, the Shiromani Akali Dal or others, have not done anything significant for SCs other than play appeasement politics.

“The leadership in the mainstream political parties, the Congress and the Akali Dal, has been dominated by Jat Sikhs. They never nurtured any Dalit leader, only to ensure that their dominance continues. Even now, the appointment of Chief Minister Charanjit Singh Channi by the Congress is a move borne out of compulsion. Firstly, Ambika Soni declined the offer of the Chief Minister’s post, then the party couldn’t arrive at a consensus on Sunil Jakhar and Sukhjinder Randhawa. Channi’s name was not even in the contention. His name came up for discussion only after the party ran out of its primary options,” points out Mr. Kali.

Professor Ram notes that mainstream State political parties have their targeted the SC population region-wise, which prompted further factionalism within the SCs of Punjab. “Babu Kanshi Ram of the Bahujan Samaj Party worked hard to bring political unity among different castes within SCs in Punjab, but after finding not much scope, he shifted his focus to Uttar Pradesh,” he said.