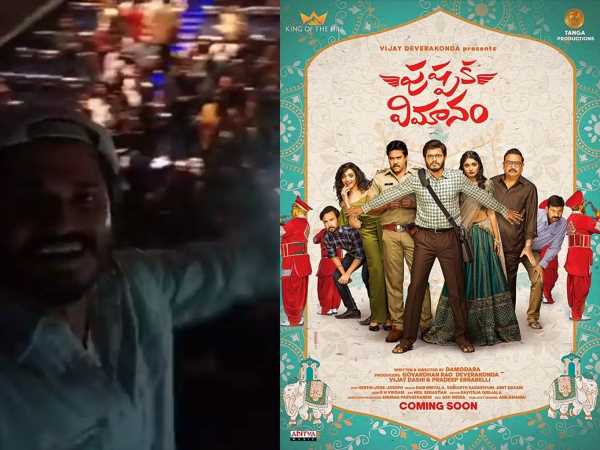 The young actor Anand Deverakonda is making his mark by doing different films in Telugu film Industry.  His previous offering the  romantic comedy and family film Pushpaka Vimanam is running successfully at the box office and is winning the hearts of the movie lovers. Helmed by Damodara, the film is presented by  Arjun Reddy and World Famous Lover fame Vijay Deverakonda.  The movie Pushpaka Vimanam has managed to create immense buzz among the movie lovers and  Anand Deverakonda decided to witness the same live, so he visited to a cinema hall to catch a live audience reaction.  The video for the same is going viral on the social media.

Coming on the video, Anand Deverakonda is seen recording a selfie video as he is enjoying the success of Pushpaka Vimanam with  the audiences and his fans at a threat in Hanamkonda.

The movie also has Saanve Meghna, Sunil, Naresh, Kireeti Damaraju in the crucial roles. Geeth Saini is playing the female lead and the wife of Anand.  In this movie Pushpaka Vimanam, Anand  was seen playing the role of a simple school teacher.

On the otherside, Anand’ brother Vijay Deverakonda is currently working for Liger which is progressing at the brisk pace under the direction of Puri Jagannadh.