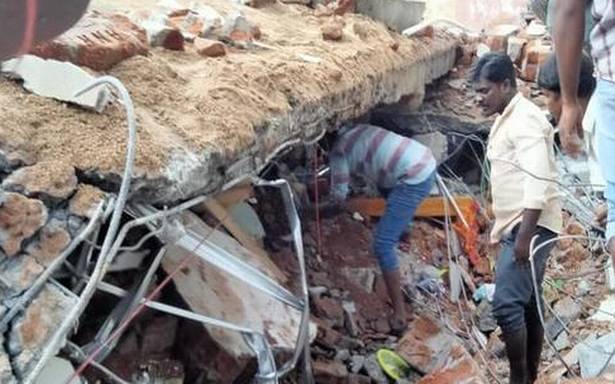 Even as the rains abated, flooding continued in several localities of Tirupati and Chittoor municipal corporations on Saturday. The municipal authorities went on a whirlwind visit of the affected areas, cautioning residents to move to safer places. In a separate incident, six persons were killed when teo buildings collapsed in Kadiri town of Anantapur district following incessant rains in the last couple of days.

In Tirupati, a majority of the badly affected residential colonies along the foothills of Tirumala Hills from Leela Mahal junction to Karakambadi were seen gradually seen limping back to normalcy with receding water levels.

In several localities, residents mostly complained of their motorcycles and pets getting washed away, and valuable documents and bank passbooks getting soaked. The areas from SP Mahila University towards Krishna Nagar, MR Palle, Vaikuntapuram, Bairagipatteda, and some localities on the AIR Bypass roads were water-logged. The areas of Auto Nagar, Gollavanigunta on Tirupati-Renigunta road were also under water.

In Chittoor, the flooding from Gangineni Cheruvu and Kattamanchi stopped, while the areas along the Neeva River from Iruvaram to Murakambattu and NTR Jalasayam continued to witness water-logging.

Six persons died and one more is fighting for life with burn injuries when a three-storeyed under-construction building collapsed on a two-storeyed structure adjacent to it, in Kadiri town of Anantapur district, in the early hours of Saturday.

The under-construction building had no pillars and was being built on an old ground floor house. The incessant rain for five days in the town led to the walls of the old building giving way and falling on the adjacent building at 2.45 a.m., which triggered an LPG cylinder blast, and that added to the magnitude of the accident, said the police.

The owner of the under-construction building Firoza Bee, 65, died in the mishap. The other deceased were identified as Saidunnisa, 2, Fariunnisa, 8 months, Banu, 30, Yashika, 3, and Fathima Bee, 65.

Officials of the irrigation, Roads and Buildings and police appraised Mr. Jagan about the flood fury, focussing on the rescue operation at Cheyyeru river tragedy in Rajampet division, where eight people died. The Chief Minister told the officials to focus on rehabilitation work and evacuation of the affected people as and when necessary. He also enquired about steps initiated for food relief in the affected areas and the arrangement of medicines to the needy.